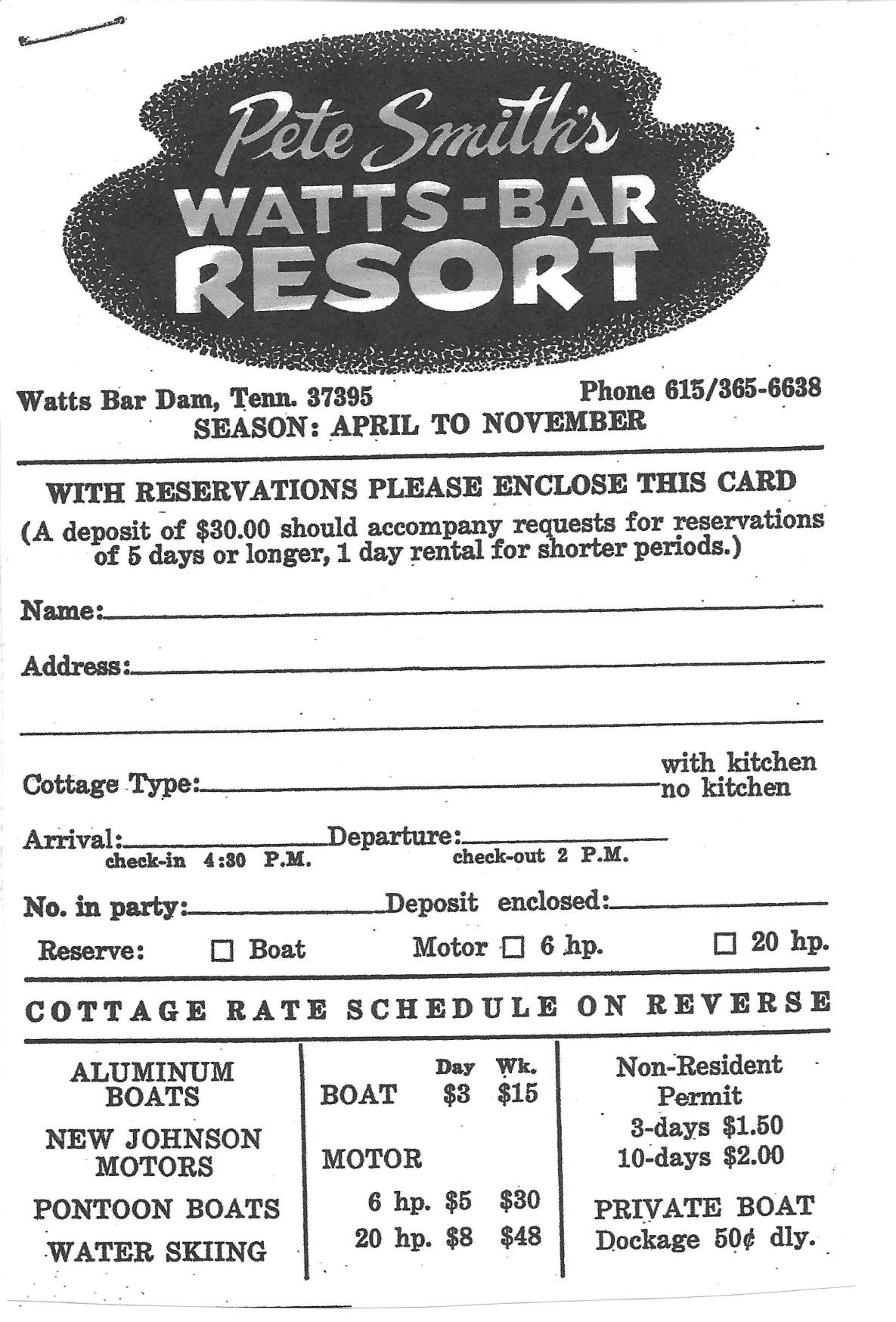 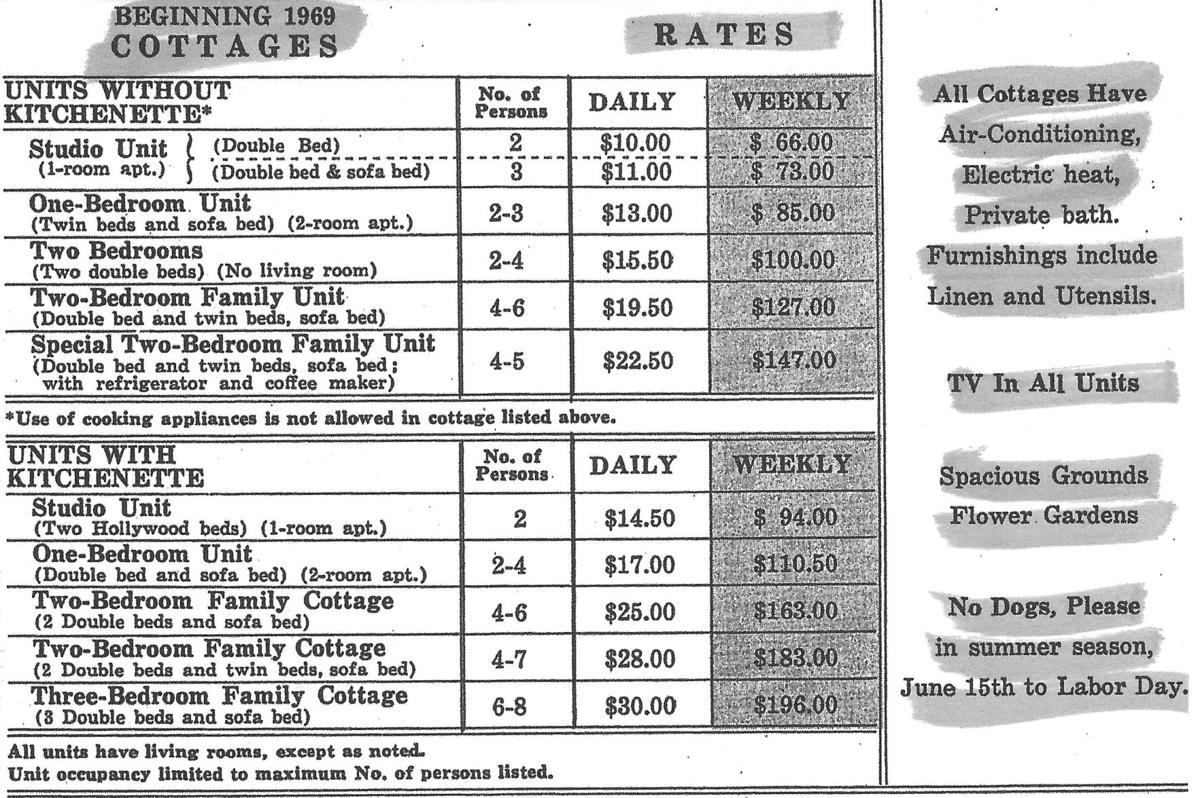 Rates for Watts Bar cottages circa 1969

Rates for Watts Bar cottages circa 1969

This is the time of year when many of us in Rhea County remember Watts Bar Resort, especially if we have grown up in this area or lived here for many years. The resort was located at the West end of Watts Bar Dam on a bluff, and was considered to be one of the most scenic areas in Tennessee. This was a place which was definitely ahead of its time, with a vision seen by its developer, Pete Smith. In fact, most people called it Pete Smith’s Resort!

According to research, the cabins at Watts Bar were built in 1939 as temporary housing for those who worked on the building of the TVA dam there. Around 1950, when those cottages were no longer needed, Pete Smith bought the property and leased the land from Tennessee Valley Authority. Smith, along with his wife, Sally, and Katie Marshall, who was co-operator with the Smiths, renovated the whole area, making Watts Bar a unique place. The resort was a seasonal business, being open from April to October, and included cabins for rent, a tennis court, shuffleboard, restaurant, boating, fishing, gift shop, and swimming pool for guests, post office, and more. The grounds were perfectly kept by Mexican gardeners whom Smith hired; there was always something blooming for visitors to see.

Watts Bar Resort was well advertised, and people came from all over the United States to take their vacation in a place that was beautiful, and away from the stress of everyday life. The cottages stayed rented throughout the season; and relationships formed between Pete Smith and his guests. The dining room was the place to be for a “special” meal, and usually required reservations if you wanted to be assured of a table. The clientele for meals not only included the cabin guests, but was also composed of people from Rhea County, Chattanooga, Cleveland, Athens, Knoxville, and other areas. Outside the dining room windows were bird feeders in which some scraps from former meals were placed for the feathered creatures. It was great entertainment to watch during a meal; sometimes other animals would raid these feeders to get some of those discards! For those who were staying at the resort, the kitchen would cook any fish caught during a fishing excursion, and serve it for a meal; and, many of their visitors delighted in having that done!

The gift shop had many unusual items for sale; these articles came from places around the world where Pete Smith and his wife traveled during the off season. I’m sure many of us in the Rhea County area still have something in our homes that came from the Watts Bar gift shop. The resort did have its own post office, with the address being Watts Bar Dam, Tennessee, and the phone number was Watts Bar-2171. This information was from a brochure of the 1950’s. Later, a post office box was added to the address, along with a zip code of 37395; the phone number was 365-6638. (Zip codes were added by the United States Postal Service in 1963; also, in December of 1963, Dayton, Spring City, and Watts Bar were officially converted to the dial system, with Spring City and Watts Bar having 365 as their prefix.)

After running Watts Bar Resort for many years, Pete Smith sold out, and was able to turn the reins over to very capable hands. Two brothers and their wives from Illinois, David and Bonnie Probst, and Edward and Joyce Probst bought the resort, keeping the same philosophy as Smith had for more than twenty years. These two couples maintained the resort as a family-oriented place for people to relax and have a stress-free vacation. Many of us remember that most things were basically the same as in the early days of the resort. There were still many parties, meals, and events which took place during the tenure of the Probst families. I remember the fried onions they served, which were heaped up on a plate like a “bale of hay,” and they were absolutely delicious, with enough for more than four people! And, of course, the Cucumber Salad, and the Coconut Cream Pie, along with many other favorites from the kitchen, will be remembered by a large number of people for a long time to come. Also, in addition to the dining room, there was a snack bar in the main area, which was used for serving overflow crowds, lunches, milkshakes, and snacks.

If a person looks at the area today, he or she would not even realize that a gorgeous place once occupied that locality. Gone are all of the buildings associated with Watts Bar Resort; the whole place has an aura of a ghost town surrounding it. However, numerous people across the country have many memories of Watts Bar Resort, including the mural on the wall leading to the dining room! This was a great conversation piece, which pictured the resort in relation to other places in the United States. Since this resort lasted for approximately half a century, it stands to reason that things were done right, both in its founding and in its following. Many people today have the memory of Watts Bar Resort in their mind, and can go there for a visit at any time! It is nice to be able to remember a place which makes you smile and think about the good times there. This was one of the premiere places which was once a signature of Rhea County, but is now only a memory to those of us who can still visualize it. Therefore, as your Rhea County Historian, I encourage you to study the past in order to live in the present and prepare for the future.