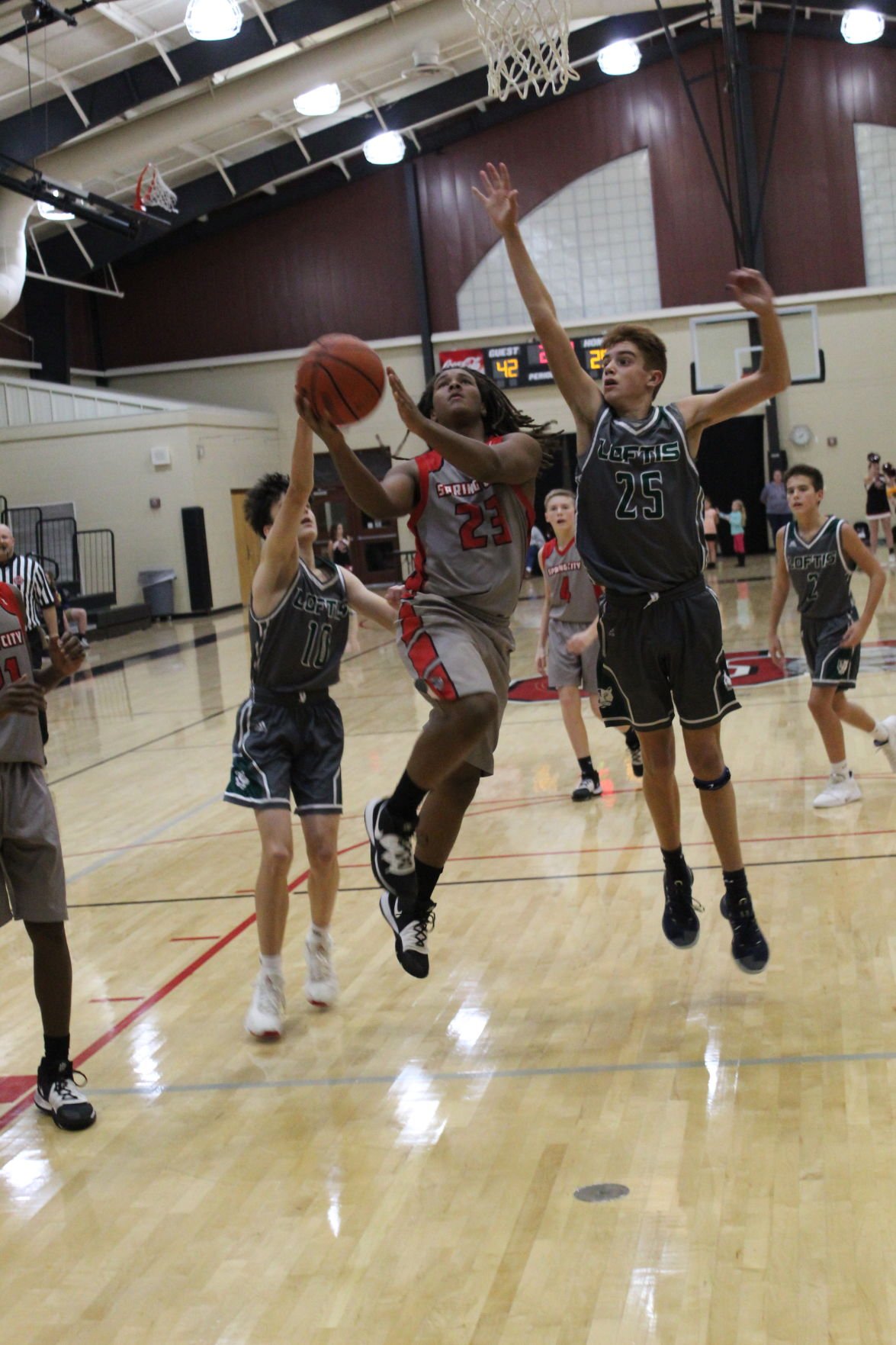 Spring City Middle School’s Latron Alloway (23) takes it to the basket in traffic during the Bulldogs’ home game with Loftis Middle School on Monday. 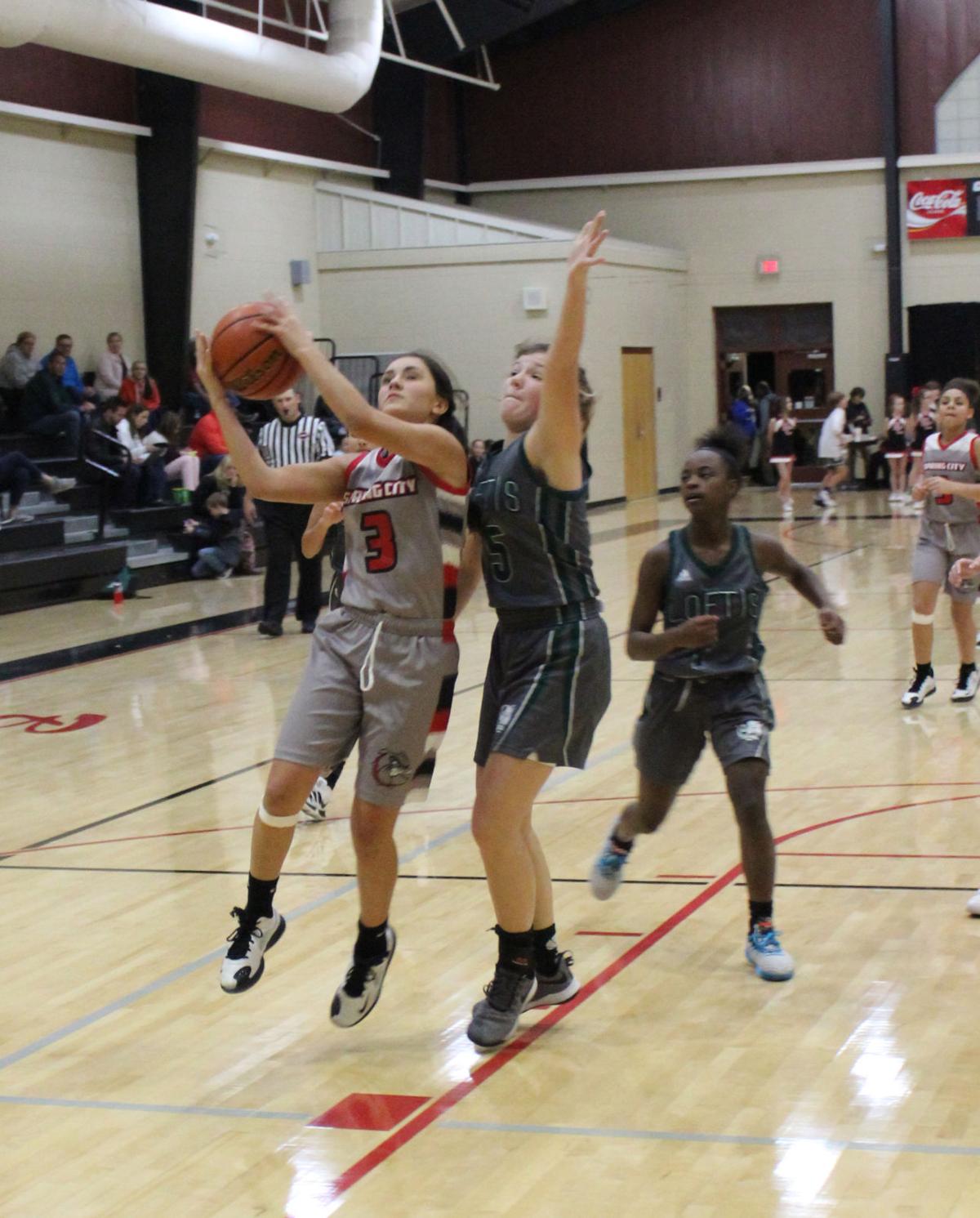 Spring City Lady Bulldog Alicia Ingle tries for a shot during a Monday night game against Loftis Middle. The Lady Bulldogs fell in both of their recent games.

Spring City Middle School’s Latron Alloway (23) takes it to the basket in traffic during the Bulldogs’ home game with Loftis Middle School on Monday.

Spring City Lady Bulldog Alicia Ingle tries for a shot during a Monday night game against Loftis Middle. The Lady Bulldogs fell in both of their recent games.

The Spring City Middle School (SCMS) Bulldog basketball teams ventured to Chilhowee Middle School on Friday, and came home with a 1-1 record. The Lady Bulldogs fell 26-13, and the Bulldogs won 37-32.

The SCMS teams hosted Loftis Middle School on Monday, and chartered two losses, as the Lady Bulldogs fell 48-11, and the Bulldogs suffered a 49-35 setback.

The Chilhowee girls’ squad won the first quarter 12-2, and closed the first half with a 20-2 lead.

Alicia Ingle led the Lady Bulldogs in the third period with nine points, including a trey, to help outscore Chilhowee 9-2.

Chilhowee held on in the fourth, edging SCMS 4-2.

The SCMS Bulldogs won three out of four quarters to best the hosts. Hank Logsdon tallied eight of his 14 points in the opening quarter to help the Bulldogs jump out to a 12-7 lead.

Both teams remained consistent in the second, as the Bulldogs outscored Chilhowee 12-7 and took a 24-14 halftime lead. Contributing points in the second period were Logsdon (5), Keshawn Smith (4) and Cooper Brackett (3).

Chilhowee won the third 11-6, and both teams charted seven points apiece in the fourth and final quarter.

The SCMS girls battled the visiting Loftis girls’ team to an 11-7 score at the end of the first quarter, in favor of Loftis.  Loftis took advantage of multiple turnovers caused by full court pressure defense and second and third chance rebounds to expand its lead, and eventually secure the win.

Despite the setback to the Lady Bulldog team, who only has one eighth-grader on the roster, SCMS head coach, Ashlee Brackett is happy with the progress her young team is making throughout the year.

“I’ve seen a lot progress in them, and they get better every day,” said Brackett. “They listen, and work hard in practice, and they work hard in games. We’re just young, and only have one eighth-grader on the team, but we are getting better.”

Scorers for the Lady Bulldogs include:  Karma Swafford 7; Waldo 4.

The SCMS boys trailed 14-3 mid-way through the first quarter in the contest, but battled back to a 17-10 score, in favor of Loftis, headed to the second period.

The Bulldogs were only down 22-19 at the half, and continued to battle in the second and third quarters, winning both periods with a combined score of 19-18. Behind the career-high game from Caleb Carr, who tallied 16 points on the night, SCMS went on a 16-4 run in the second and another run in the third to cut the Loftis lead to 29-27. However, Loftis regrouped, and went on a 20-8 run to close the game and secure the win. Cole McCormick dropped in 34 points for Loftis.

“We’re a scrappy bunch. We have some things we’ve got to work on, such as some man-to-man stuff, take better shots and handle the basketball,” said Brackett. “But, to be a seventh grade loaded team, with only one eighth-grader, I couldn’t be more pleased tonight. I loved their effort. And, that’s what I try to teach these kids here at Spring City, is have a little fight about you. You know, we’re not going to give up, and that’s the reason we played all the way to the end like they did tonight.”

The SCMS teams will travel to Vonore Middle School on Tuesday, Dec. 3, with varsity only games beginning a 6 p.m.