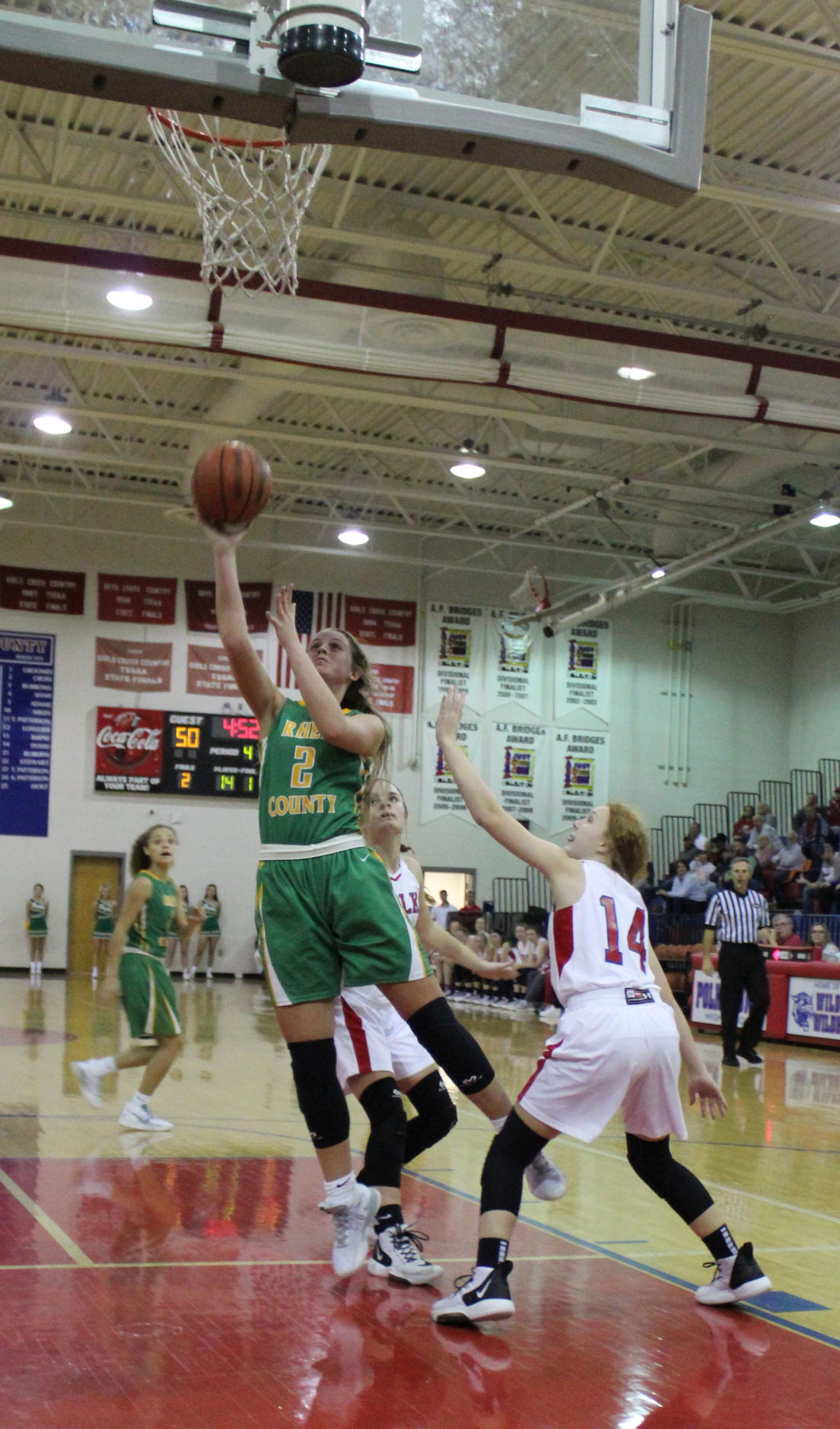 Pictured, is Lady Eagle, Haley Cameron, splitting two Lady Wildcat defenders on her way to the hoop during the Lady Eagles’ 57-44 win on Monday night. 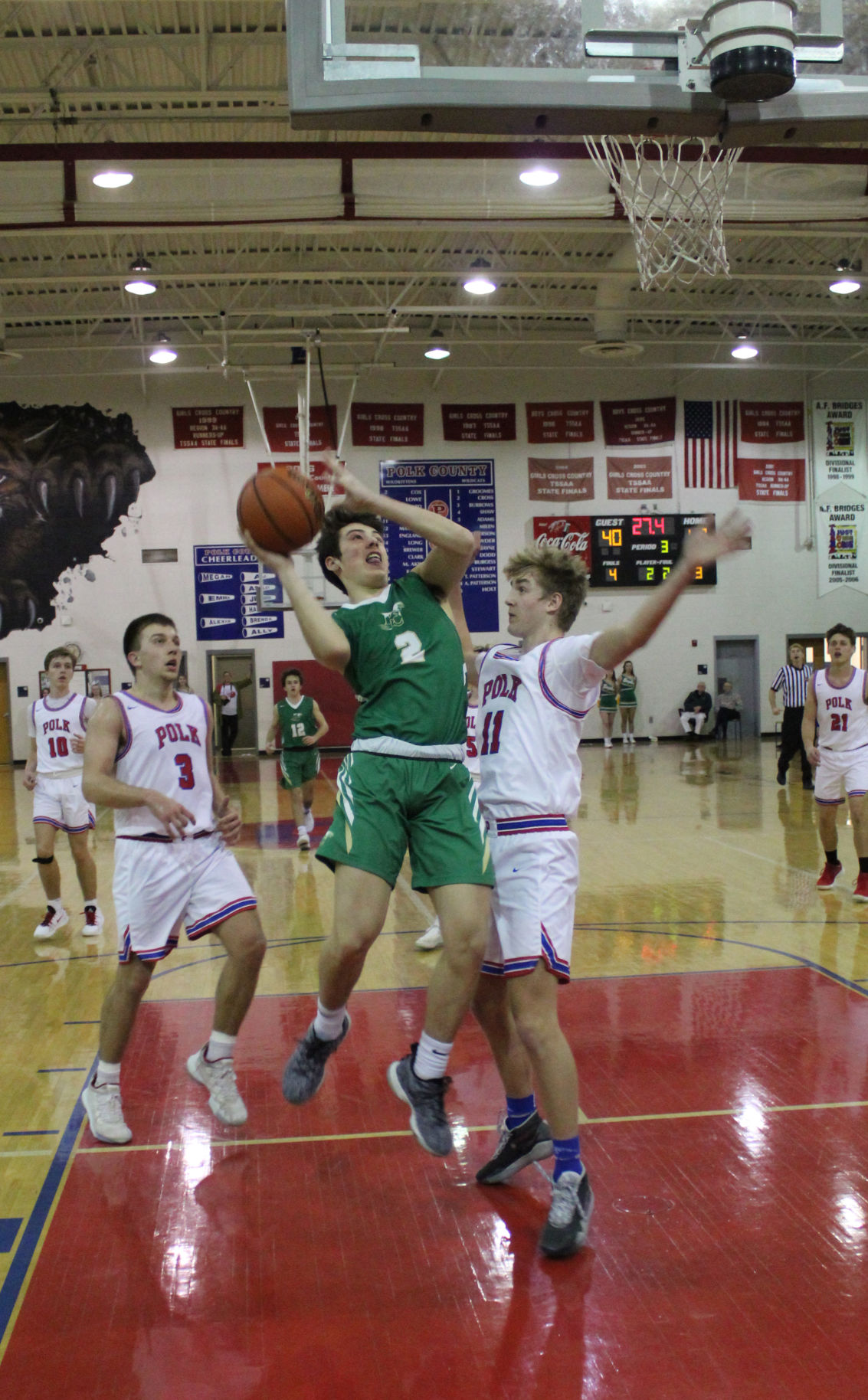 Pictured, is Rhea County High School Eagle, Jacob Allen (2), going up in the paint for a 2-point basket against a Polk County defender on Monday night. Allen had two points in the Eagles’ 64-50 loss. 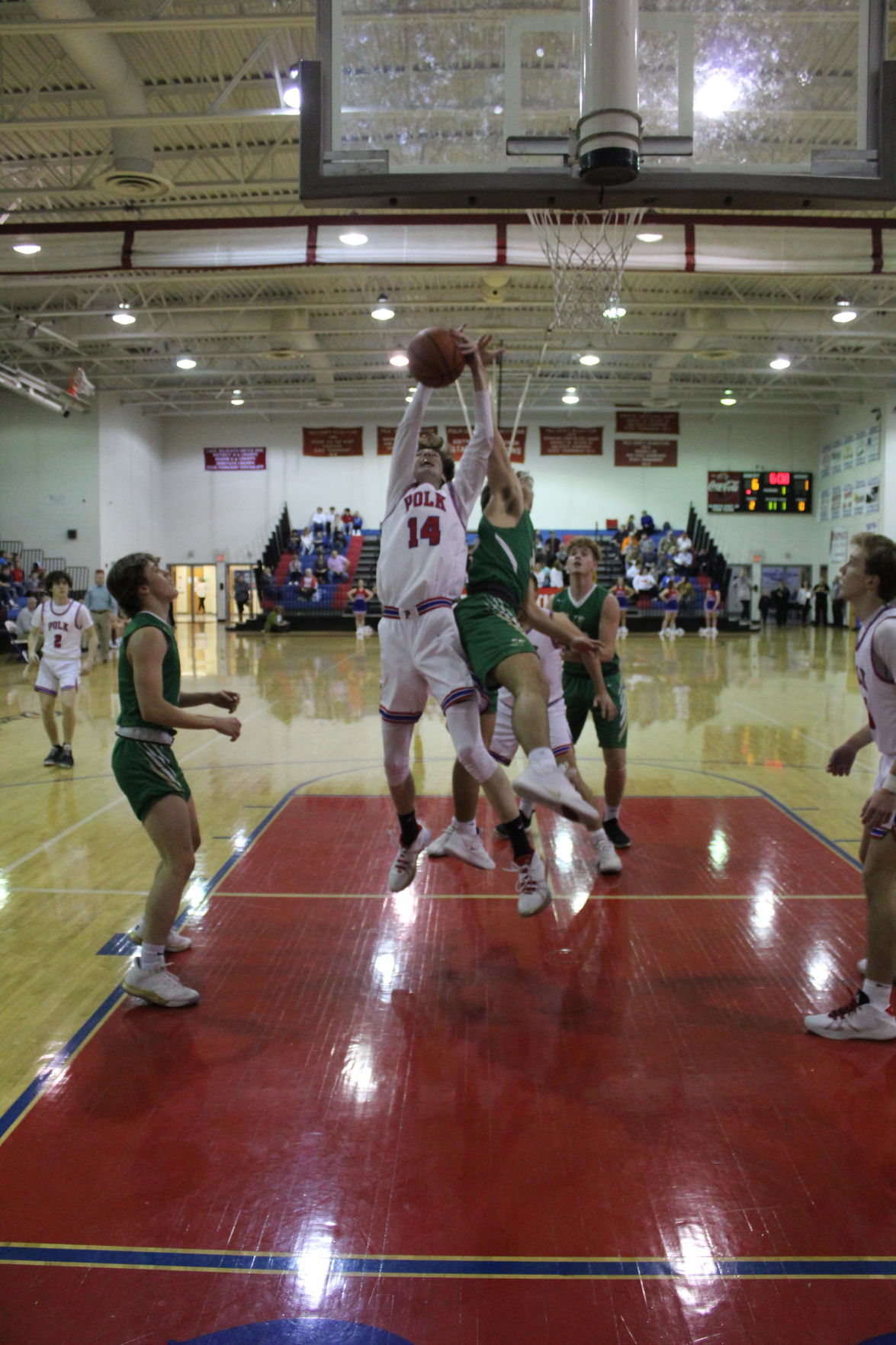 Pictured, is Lady Eagle, Haley Cameron, splitting two Lady Wildcat defenders on her way to the hoop during the Lady Eagles’ 57-44 win on Monday night.

Pictured, is Rhea County High School Eagle, Jacob Allen (2), going up in the paint for a 2-point basket against a Polk County defender on Monday night. Allen had two points in the Eagles’ 64-50 loss.

The Rhea County High School Eagle basketball teams traveled and faced the Polk County High School Wildcat squads in Benton on Monday night. The Lady Eagles (11-1) claimed a 57-44 victory, while the Eagles (3-9) suffered a 64-50 setback in the non-district contest.

The Rhea girls jumped out to a sizeable advantage in the opening quarter, as they garnered a 21-12 lead. Mallory Hampton, who led all scorers with 23 points, dropped in nine points for the Lady Eagles, including a 3-pointer, in the first.

Macy Welch tallied eight points in the first period for the Lady Eagles, while teammate Haley Cameron added four of her 18 points on the night. The Lady Eagles edged the Lady Wildcats 13-10 in the second quarter, as their largest lead of the first half was 14 points.

With a 34-22 lead at the half, the Lady Eagles won the third 13-6 and carried a 47-28 advantage into the final quarter. Their largest lead in the second half was 19 points. Polk County won the fourth 16-10, but the Rhea girls had already secured the 13-point win.

Lady Eagles’ head coach, Tracy Vest, was glad to get the win, but acknowledged his team may have been out of sync, of sorts, due the holiday break, and the 9-day layoff since their last game.

“It was very sloppy and inconsistent at times. We would get a lead, and they would come back, and it was back and forth the whole game,” said Vest. “It’s a Monday game, we’re not in school, and sometimes, they don’t come ready to play. […]

“We’ve finally got everybody healthy, and we’re waiting on one more to see if she can get cleared this week,” added Vest. “We’ve just got to get back into the swing of things and get ready for district play coming up next week.”

Lady Eagle Notes – The team combined to hit six 3-pointers. Cameron had three, as Hampton tallied two and Taylor had one. The Lady Eagles went 9-of-16 from the free throw line. Senior point guard, Maddie Smith, had five assists.

It seemed to be raining threes in the first period, as senior, Carter Rekoske, drained four 3-pointers to the lead the Eagles with 12 points. Fellow senior, Ricky Guthrie added six points to help guide the Eagles to an 18-13 lead headed to the second period.

Rekoske hit two more treys in the second, while sophomore teammate, Austin Brackett, drained one as well for the Eagles. The Wildcats, however, edged the Rhea boys 14-12, and the Eagles clung to a 30-27-halftime lead.

Despite Rekoske hitting two more treys, bringing his total to eight 3-pointers in the game, the third quarter wasn’t kind to the visiting Eagles. The hosting Wildcats cranked out 24 points to Rhea’s 12, and led 51-42 headed to the final period. Polk won the fourth 13-8 to secure the 14-point win.

Eagles’ head coach, Daniel Curtis, praised his team’s effort, including the red-hot shooting from Rekoske, but hopes to see his team put together a complete game.

“Carter shot the ball well,” said Curtis of Rekoske, who hit eight 3-pointers on the night. “And defensively, when we quit scoring in the second half, we quit playing defense too. It’s just frustrating, and it was a frustrating [second] half.

Our shots weren’t falling, and when shots aren’t falling, you don’t have that hop in your step, like we did in the first half because our shots were falling,” added Curtis. “Polk County is not a bad basketball team, they’re a decent team, but I just felt like we were the better team. We’re just not putting four quarters together, and it’s just frustrating."

Eagle Notes – Rekoske went 8-of-13 from beyond the arc, as he hit eight 3-pointers. Guthrie had a double double, with 19 points and 10 rebounds. Senior point guard, Hunter Brady, had eight assists.

The Rhea squads will host Knoxville Catholic High School on Friday, Jan. 10, with the Lady Eagles’ game starting at 6 p.m. and the Eagles’ game slated to begin at 7:30 p.m.