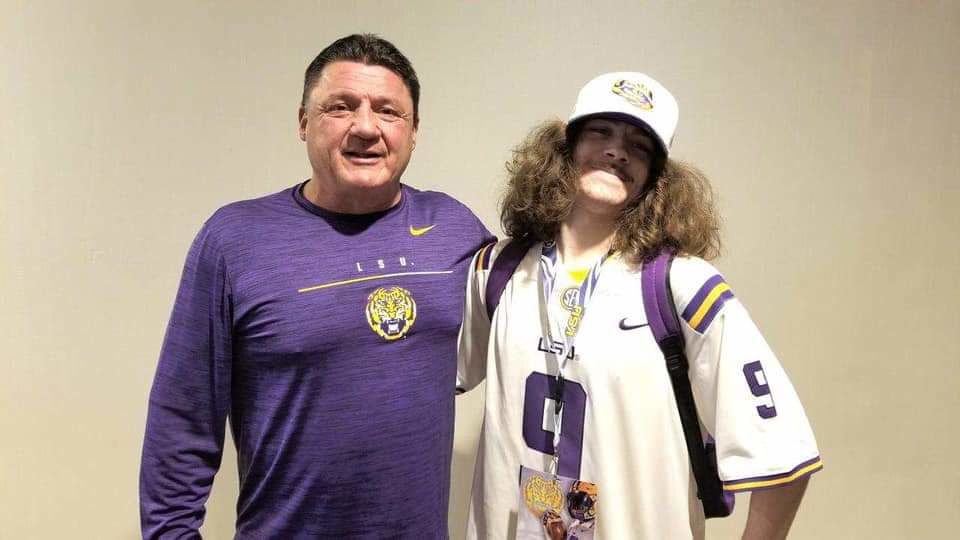 Pictured, is Dakota Shrum, left, with with his mom, Angela Russell, at the game. 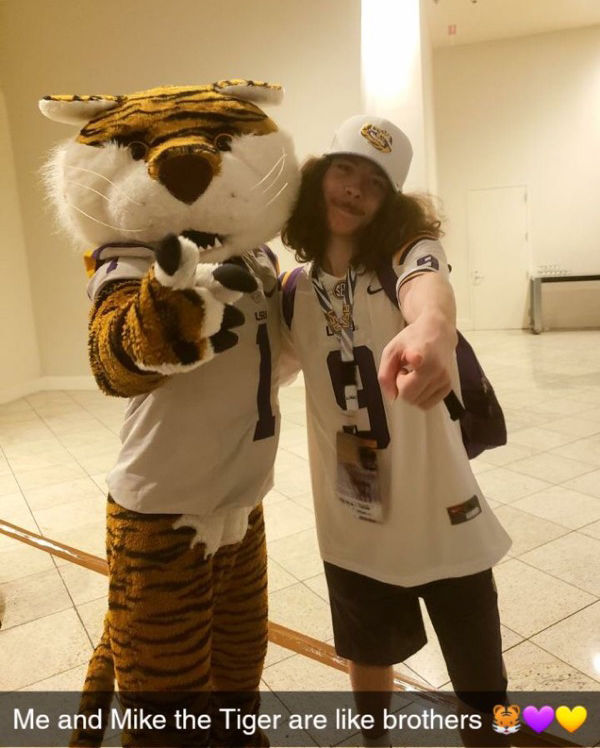 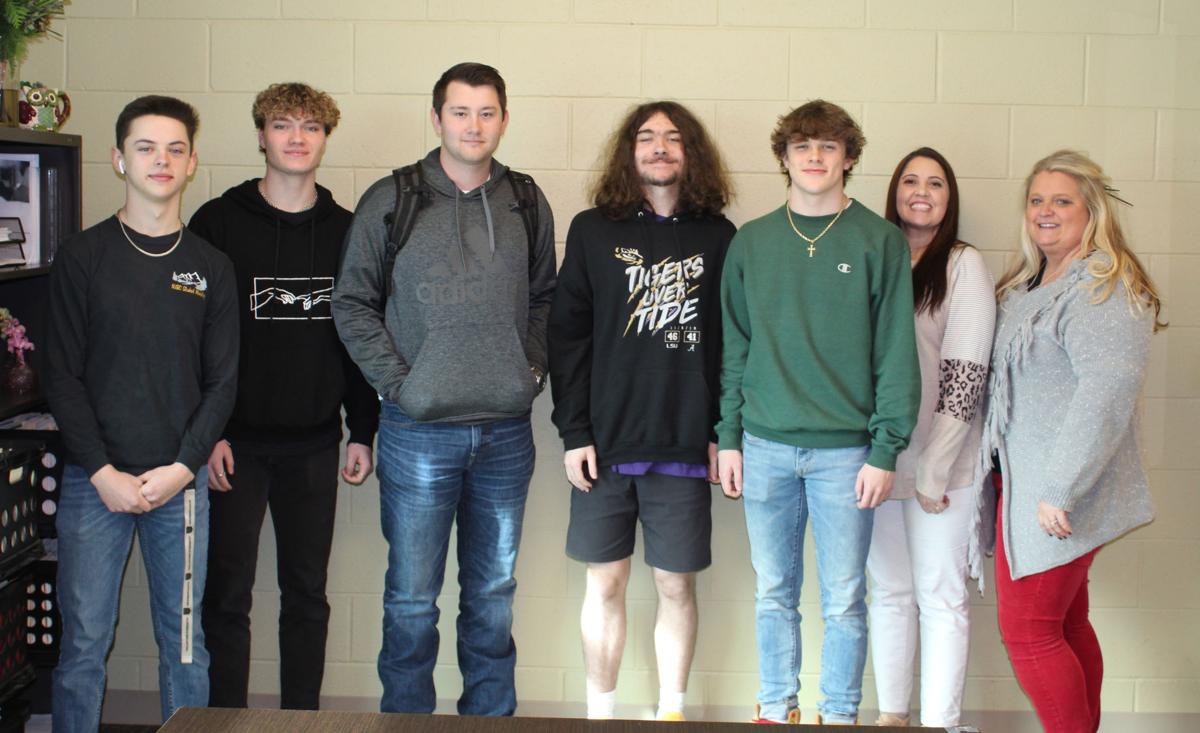 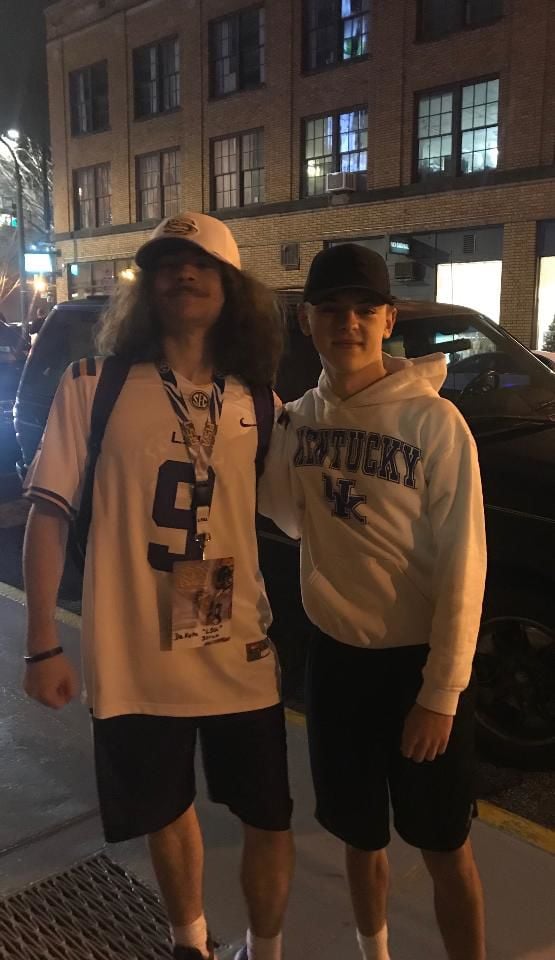 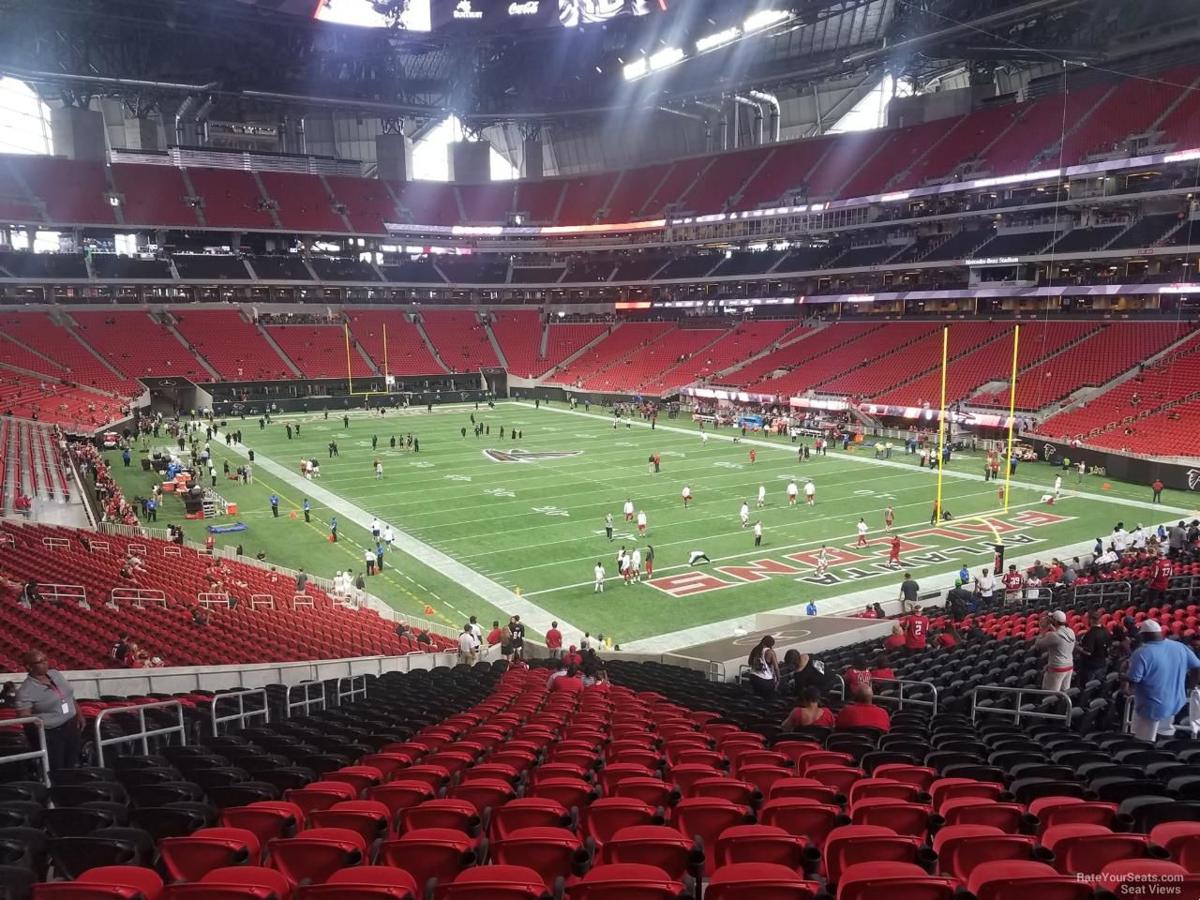 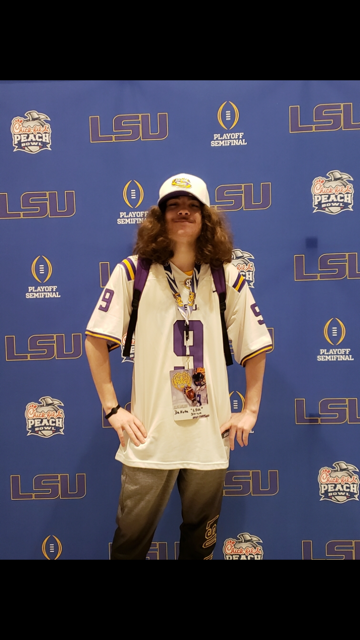 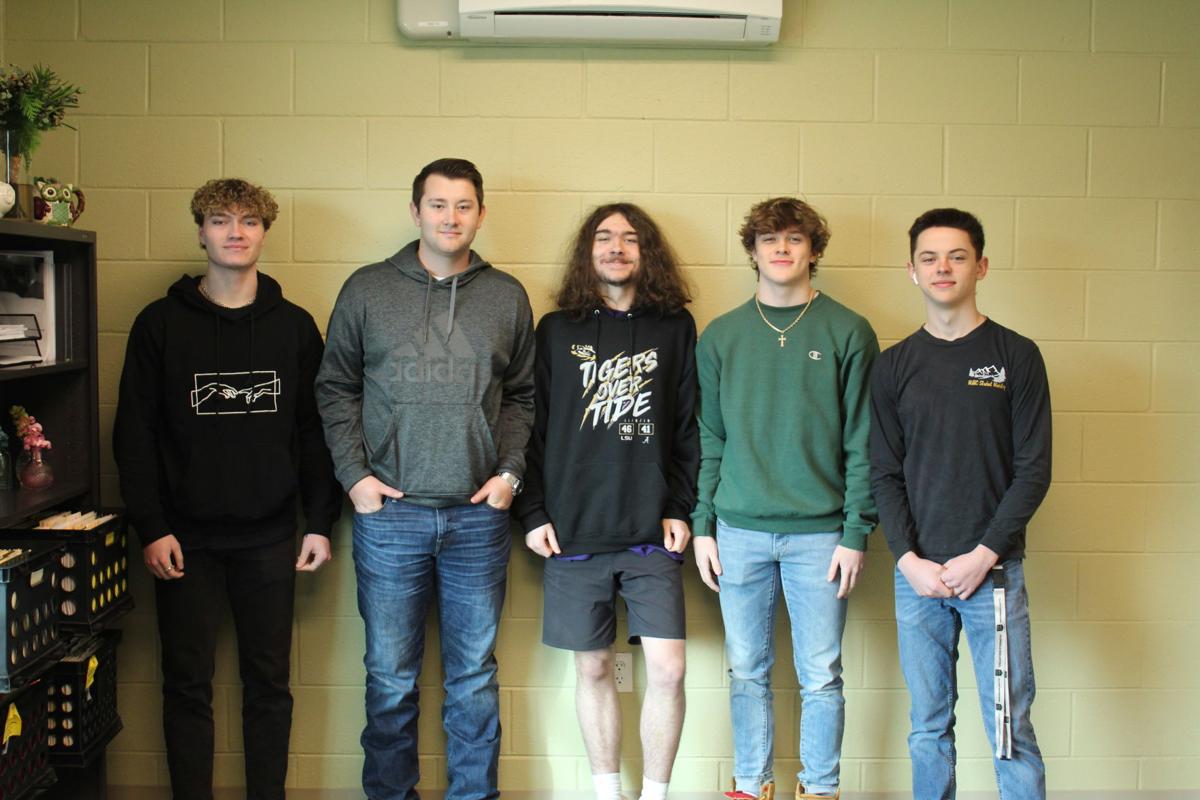 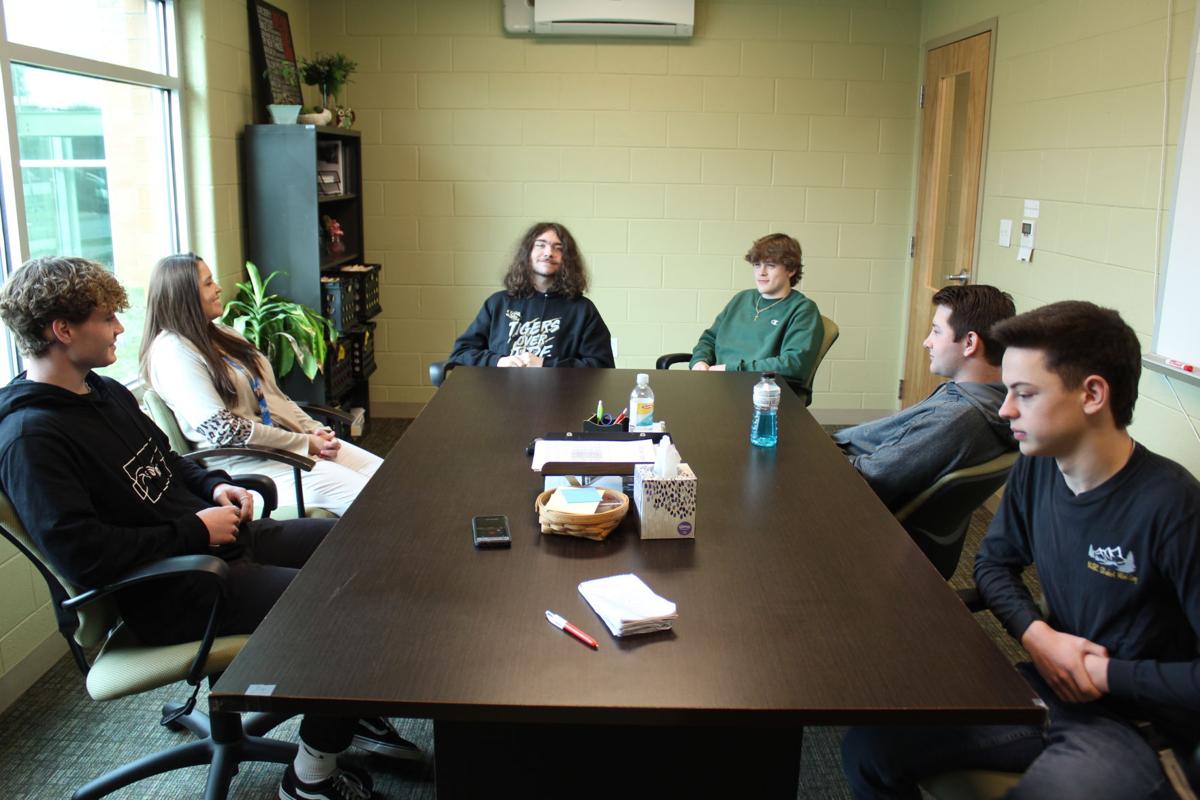 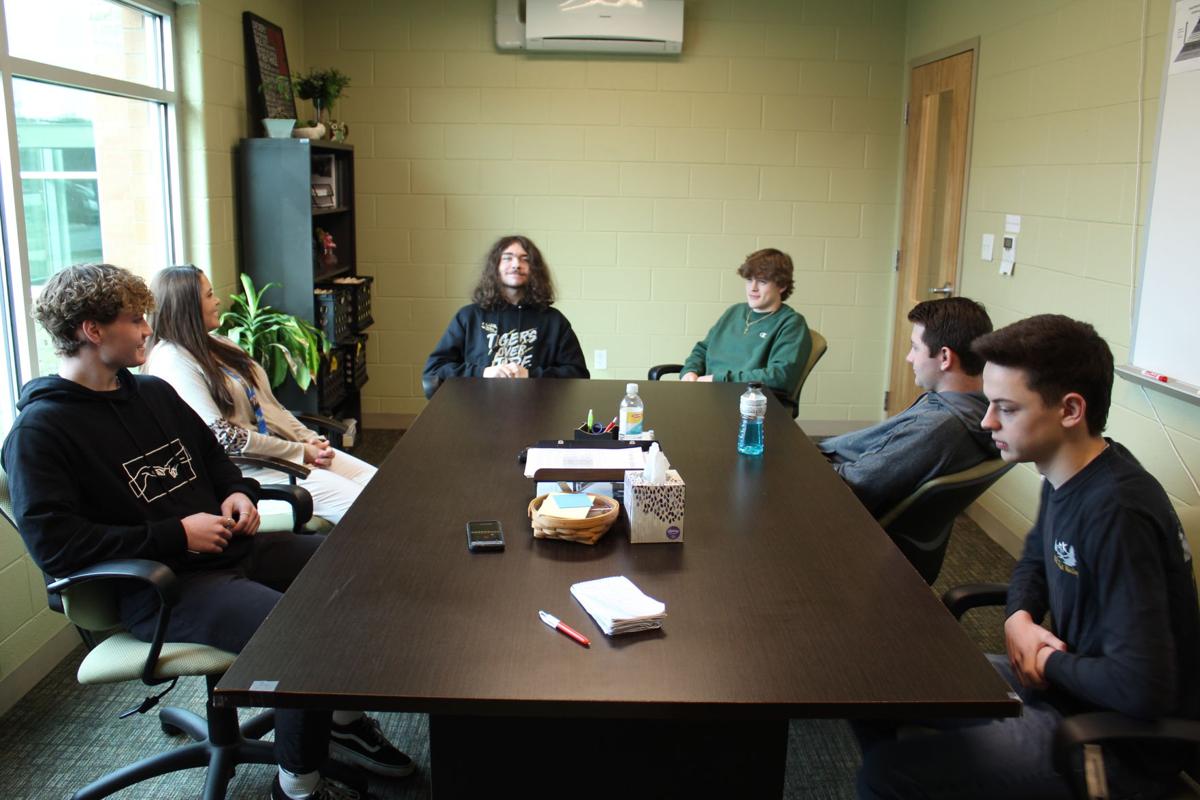 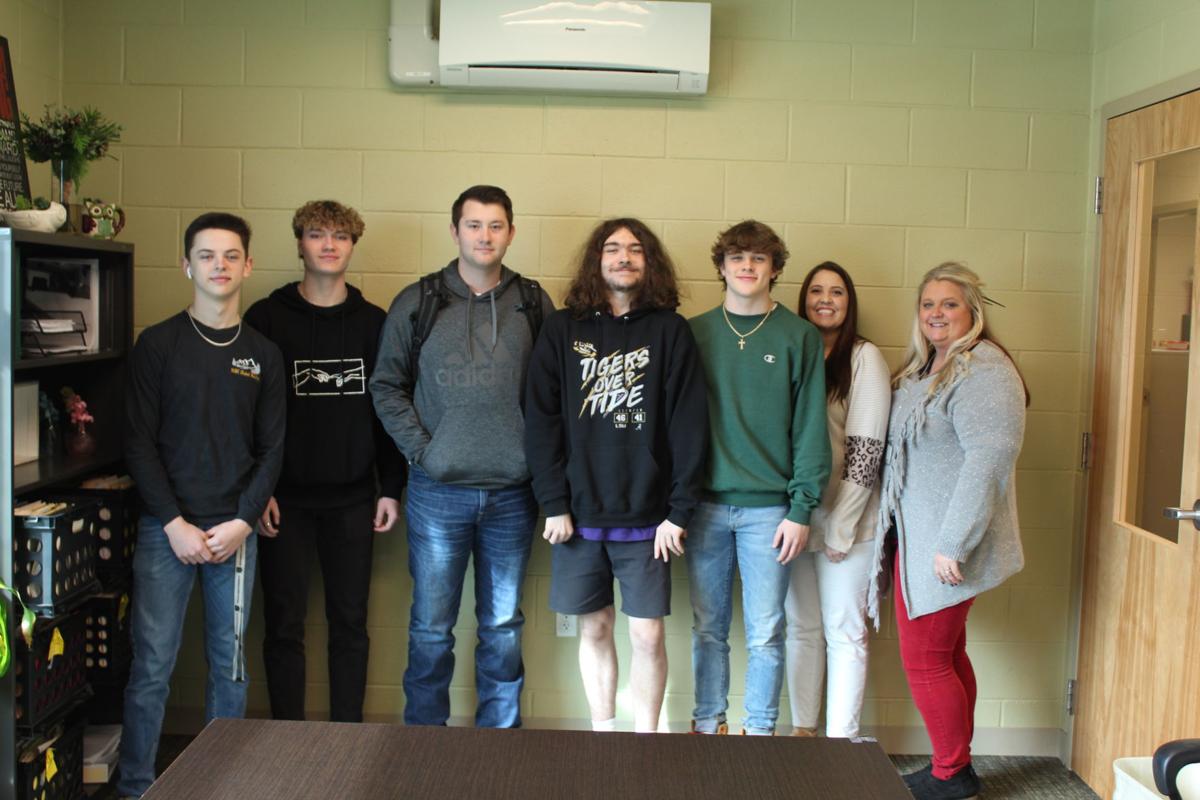 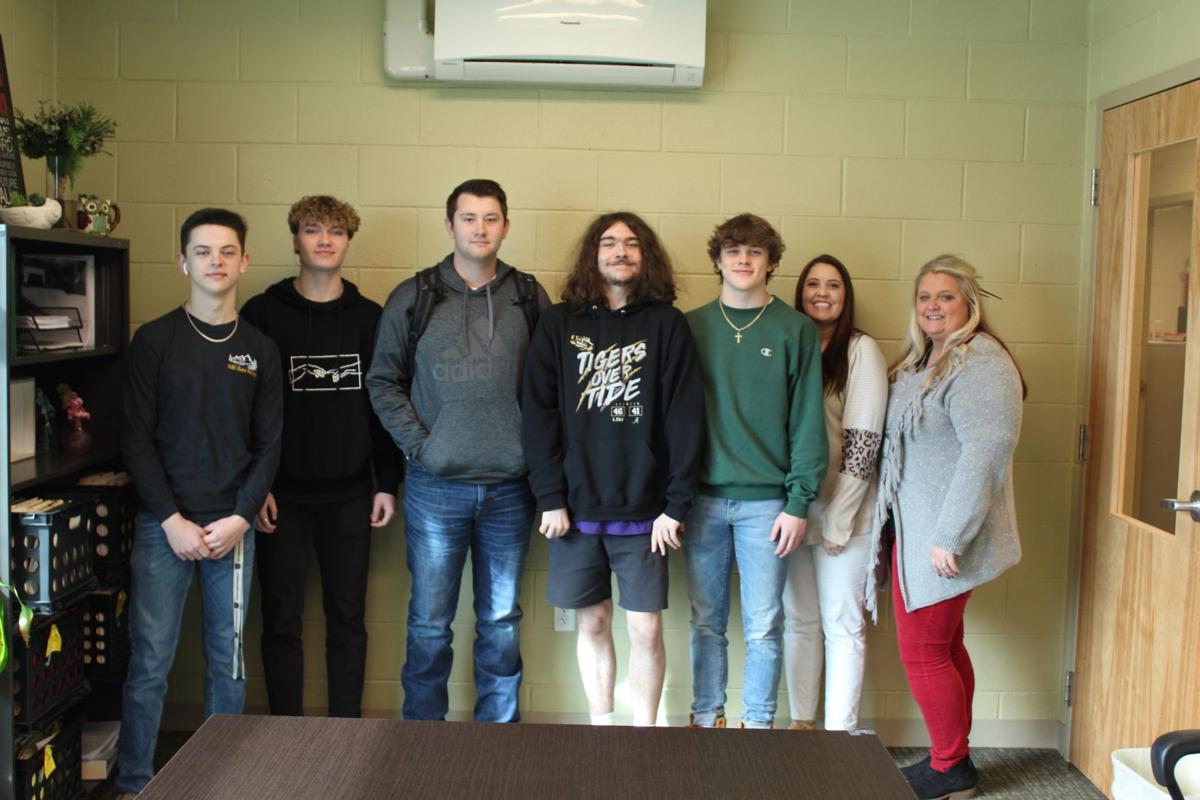 Pictured, is Dakota Shrum, left, with with his mom, Angela Russell, at the game.

The word friend is defined by Merriam-Webster’s dictionary as one attached to another by affection or esteem, an acquaintance, one that is not hostile or a favored companion.

For Dakota Shrum, a.k.a. ‘LSU’, or ‘Joe Burrow’, as he is widely known by all of his friends and everyone at RCHS, what began as a dare, promise, bet or wager, if you will, turned into a dream of a lifetime that came true.

Dillon Brown, Dakota’s best friend, was teasing Dakota one day about him talking a lot during lunchtime. Brown told Dakota if he were quiet throughout the entire lunch period without saying a word, they would get him a surprise, as they called it.

Much to the ‘LSU Dream Team’s’ surprise, Dakota lived up to his end of the bargain and remained quiet throughout lunchtime. So, Dakota’s friends began to brainstorm, via group chat and continued their discussion during a pickup game of basketball later that night. One thing led to another and next thing you know, they came up with the idea to get him tickets to the Peach Bowl in Atlanta, where the LSU Tigers played the Oklahoma Sooners in the College Football Playoffs on Saturday, Dec. 28, 2019.

RCHS Special Programs Administrative Assistant, Karen Morgan, knows Dakota, the ‘LSU Dream Team’ and witnesses their interactions with each other first hand on a daily basis, as she has lunchtime duty and is around them a lot. Morgan also acted as a liaison between Dakota’s mother, and the group of friends. Morgan emphasized how genuine the groups’ bond is, and lauded the ‘LSU Dream Team’ for their generosity.

“During lunch duty, I got to know all of them and we all became friends, and then one day, [the ‘LSU Dream Team’] approached me about the ticket idea, and asked me if I would ask Dakota’s mom,” said Morgan of the beginning phases of the surprise idea. “I wasn’t sure it would happen, but the next day when it did happen, I asked, ‘is this real?’ Because, I couldn’t believe it actually happened.

“I wouldn’t put it past them, because they are really nice to Dakota and super sweet,” added Morgan. “I watch them all at lunch, and I know if something bad happens, because Dakota will come and tell me if something bad happens to him, but he didn’t that day, and I knew they were really good friends. I was really happy that they came through with it, because Dakota is a literal person, and if they had promised him they would do something, it would break his heart if they didn’t. There are good kids in the world, specifically, Dakota’s friends, and we see good kids here at RCHS every day.”

Not an easy task for the LSU Dream Team, comprised of Preston Geer, Ross Pendergrass, Kade Vincent and Brown, but they pooled their own money together to make sending Dakota to the playoff game a reality. Brown’s mother, Andrea Sansone also contributed to the surprise gift, unbeknownst to the group at the time, paid for a parking pass and a seat upgrade from upper level to the lower level for Dakota and his mother, Angela Russell. Within a day or two after they formed the idea, the ‘LSU Dream Team’ had purchased the tickets and had them ready to present to Dakota.

On Dec. 10, 2019, the ‘LSU Dream Team’ presented Dakota with the game tickets, along with an LSU shirt and other LSU gear.

“I didn’t even know I was even going to the game. I knew that they told me it was some kind of surprise, and I said, oh, it’s something LSU,” said Dakota in describing his moments before opening his surprise gift. “I just opened up the present, and got a shirt, and at the very bottom of it, there were tickets in there. They said, ‘two seats’ on it, and I said, ‘I’m going to the Peach Bowl!’”

Upon realizing Dakota had just received two tickets to go see his LSU Tigers play in their playoff game, which marked his first ever LSU game to attend, he immediately took off running down the hallway with excitement, along with a bit of shock and disbelief.

Along with the ticket upgrade, other helpers familiar with the surprise got on the phone, specifically, Chip Pendergrass, Ross’s father, who made a call to an SEC official he knew, and that person called another, and so on, next thing Dakota knew, he and his mother received passes to attend a special media event hours before kickoff. Former RCHS student-athlete, Savannah Farnsworth, even got involved in the coordinated effort for Dakota to meet with Coach Orgeron, as she is employed at LSU. At the event, Dakota got to meet LSU Tigers’ head football coach, Ed Orgeron, along with ‘Mike the Tiger,’ the official mascot for the LSU Tigers.

“Before the game, an assistant coach came and got us and took us to a room where you had to have a special pass. We were just talking and all of a sudden, the elevator opened up and Coach ‘O’ came out, and I was like, he’s right there,” said an excited Dakota in describing his meeting with the LSU head coach. “First we got a picture with Coach ‘O’, then me and my mom were talking to him about mom’s family being from St. Charles Parrish, where Coach ‘O’ has family there too.

“When Coach ‘O’ was getting reading to leave to go to a press conference, I said, ‘Coach ‘O’, you forgot one thing, and he said, ‘What’s that,’ and I said, ‘you gotta give me a go Tigers,’ and he did,” continued Dakota.

When asked if he believed if LSU would win the national championship before the 2019 season began, Dakota answered with an emphatic “YES!”

In a group interview with Dakota and his friends, with a chuckle, they all vouched for him and backed up his story of his preseason prediction about his beloved LSU Tigers. “That’s the thing, he really did,” said the group in unison about Dakota’s prediction.

Dakota’s favorite player by far, is LSU quarterback, and 2019 Heisman Trophy winner, Joe Burrow. He credits his thorough knowledge and love of the LSU team, with growing up watching them with his mother’s dad, who was also a huge LSU fan, as a majority of his family is from Louisiana.

“I’ve got three things, one, go undefeated, two, win our fifth national championship, and three, I’ve saved the best for last, and three…Go Tigers,” Dakota enthusiastically said when asked what he hopes for his LSU Tigers to do next season.

A very thankful and appreciative, Dakota, summed up what the whole experience meant to him, and especially, what his friendship with the ‘LSU Dream Team’ means to him.

“I just really care about them a lot, and I’m just thankful they actually gave me something,” said a soft spoken and humbled Dakota. “I don’t know what to do without these guys because they mean a lot to me. They gave me something that I wanted, and I don’t know if I’m ever going to forget that.

“I just really like what they did for me,” continued Dakota. “I’m just really happy that they actually care. I’ve said it before, and I’m going to say it again, this ‘LSU Dream Team’ is family, and that’s all it is.”