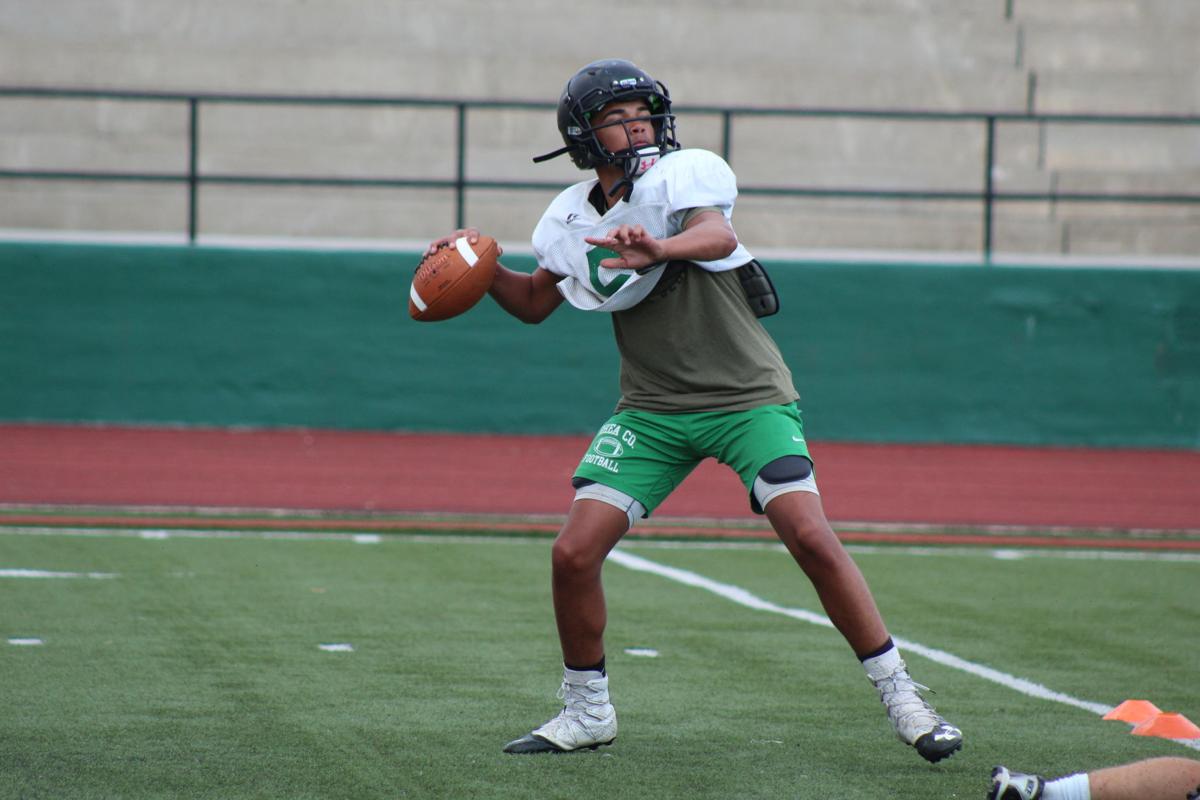 RMS quarterback/defensive back Kaleb Martin drops back to pass during Monday's practice at Eagle Stadium. 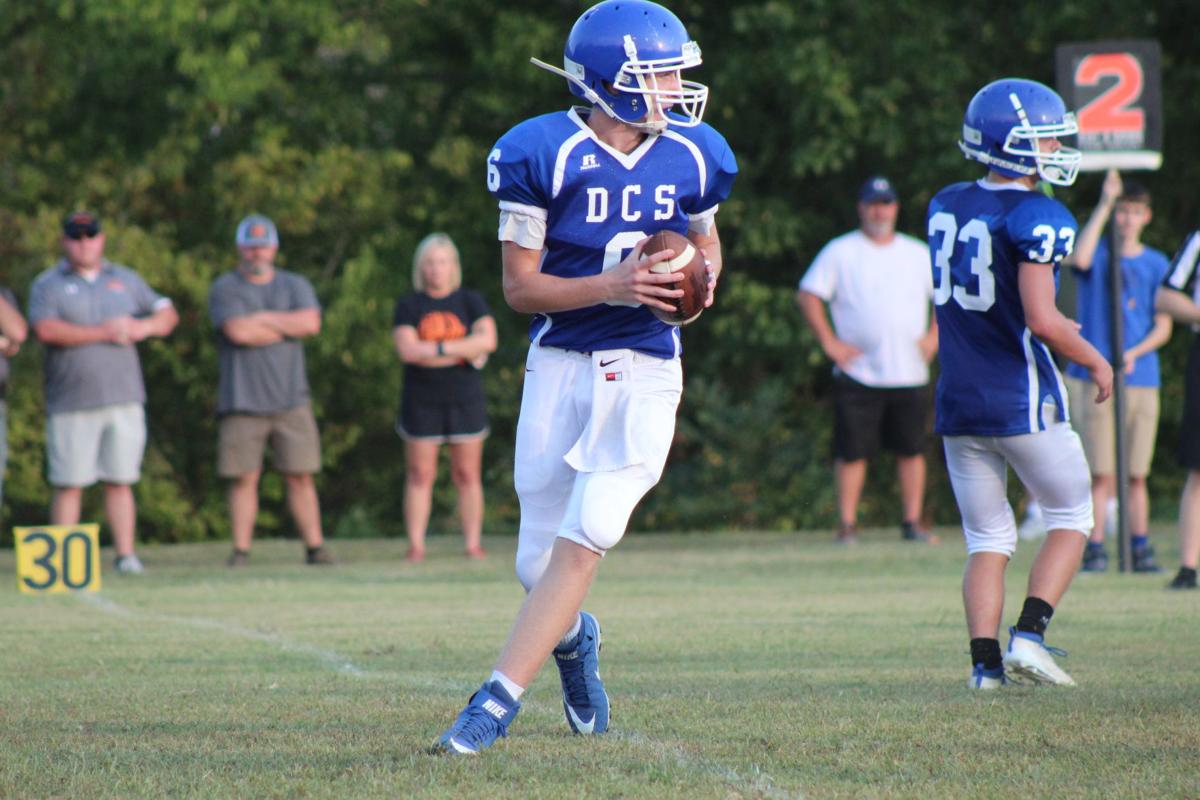 Sweatbee quarterback/safety Bryce Dupre has battled through injuries this season but hopes to be ready to go Thursday night at Rhea Middle School. 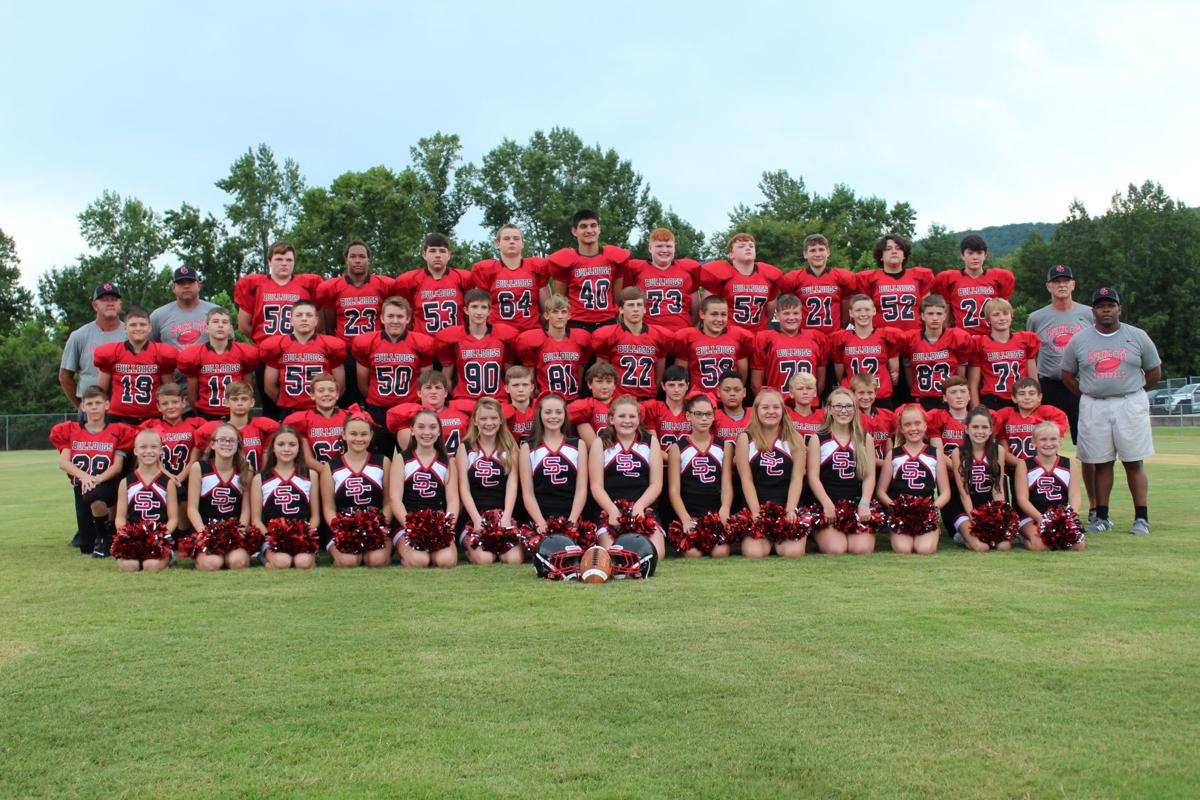 The 2019 SCMS football team, cheerleaders and coaching staff is pictured above during this summer's annual media day.

RMS quarterback/defensive back Kaleb Martin drops back to pass during Monday's practice at Eagle Stadium.

Sweatbee quarterback/safety Bryce Dupre has battled through injuries this season but hopes to be ready to go Thursday night at Rhea Middle School.

The 2019 SCMS football team, cheerleaders and coaching staff is pictured above during this summer's annual media day.

It is another big week for middle school football in Rhea County as fans have the option of another rivalry showdown as well as a championship tilt later in the evening.

Dayton City (5-2) will make the short trip to Evensville to battle Rhea Middle (6-1) on the turf of Bill Horton Field for a 6:30 p.m. game time. It will be the season finale and eighth grade night for the Eagles. RMS will look to finish strong and extend its winning streak to six straight after dropping only one game of the season to Cleveland, 45-12, in week two.

Since that game, Rhea Middle head football coach Joe Campbell has challenged his group to work hard and focus on doing some of the little things correctly. He said his squad has responded well since that night and hopes that will continue to prove true heading into Thursday night’s rivalry tilt with the Sweatbees.

“The guys have done a good job of coming together this season. They had a chance at McMinn Central to really fall a part, we had a lot of penalties over there. They could have really turned on each other but they instead pulled together to get the win and I’m really proud of how they’ve responded and come together as a family,” Campbell said.

Campbell knows the Eagles will be tested Thursday night and is hopeful they’ll rise to the challenge one final time before closing the book on the 2019 season. Rhea is essentially an “independent” school for football and is not a participant in any area league or conference, thus making Thursday night the final game--regardless of the outcome.

“It’s a special night for us with it being eighth grade night and rivalry night, so it will probably be the biggest crowd we’ve seen all year. Just have to get our minds right and bodies right,” he said. “I’ve heard DCS has some fast cats back there so hopefully we’ll be able to slow them down a bit.”

On the other sideline, Dayton City has officially locked up a district championship and secured a bye week in the playoffs. Now, they’re hopeful to get the county sweep and ultimate bragging rights after defeating Spring City in a 28-24 thriller on Sept. 19.

“Rhea Middle is a talented team and they’ve got some great players over there, some of them I’ve coached before in little league or even baseball when they were younger. Kaleb Martin, Briley Mayberry, Dalcen Davis and Maurice Shirley are all great athletes. We’re definitely going to have to be healthy and firing on all cylinders Thursday night,” head coach Jeff Hill.

“On defense, we have to be at the top of our game. Rhea really opens it up and will both run and pass it on us, so we’ll try our best to be ready to match up against them,” he added.

More than anything, Hill said he is thankful for the opportunity for these rivalry games between both Spring City and Rhea Middle that gives his players more exposure to RMS’ coaching staff who also serves on Mark Pemberton’s varsity coaching staff at the high school.

“We enjoy all the excitement that comes with a rivalry but all that ends once the game is over. Eventually these guys will be on the same team at the high school and as a Dayton City’s head coach, I want the high school staff to know who my players are, too. I’ve known a lot of these Rhea Middle kids since their days at Little Eagles so I want everyone to do well. I look forward to Thursday night as well as watching them play on Friday nights in the future,” Hill said.

Spring City (7-1) has the chance to wrap up a very solid season with a trophy in the Sequatchie Valley Conference Championship Thursday night at John Mincy Field in Spring City. The Bulldogs will kickoff against the Sequatchie County Indians at 7:30 p.m.

While the red and black already have defeated the Indians soundly in the regular season (32-0), head coach Anthony Loden was quick to acknowledge the whole adage that it is hard to beat a team twice.

“We picked up on a few things they did in the first game and things we’ve seen on film but of course they seen us too, “ Loden said. Speaking with the Bulldogs’ head coach following Monday’s practice, he said that the key this week will be just keeping the team focused and not overlooking the Indians despite beating them earlier in the year.

“It’s hard to keep them focused. It’s the last week of football for them and some of them have never played for a championship. Even today (Monday) at practice, there was some dragging around and Coach Wiley Brackett had give them a little pep talk at the end. Hopefully they come in with a better mindset the rest of the week,” Loden said.