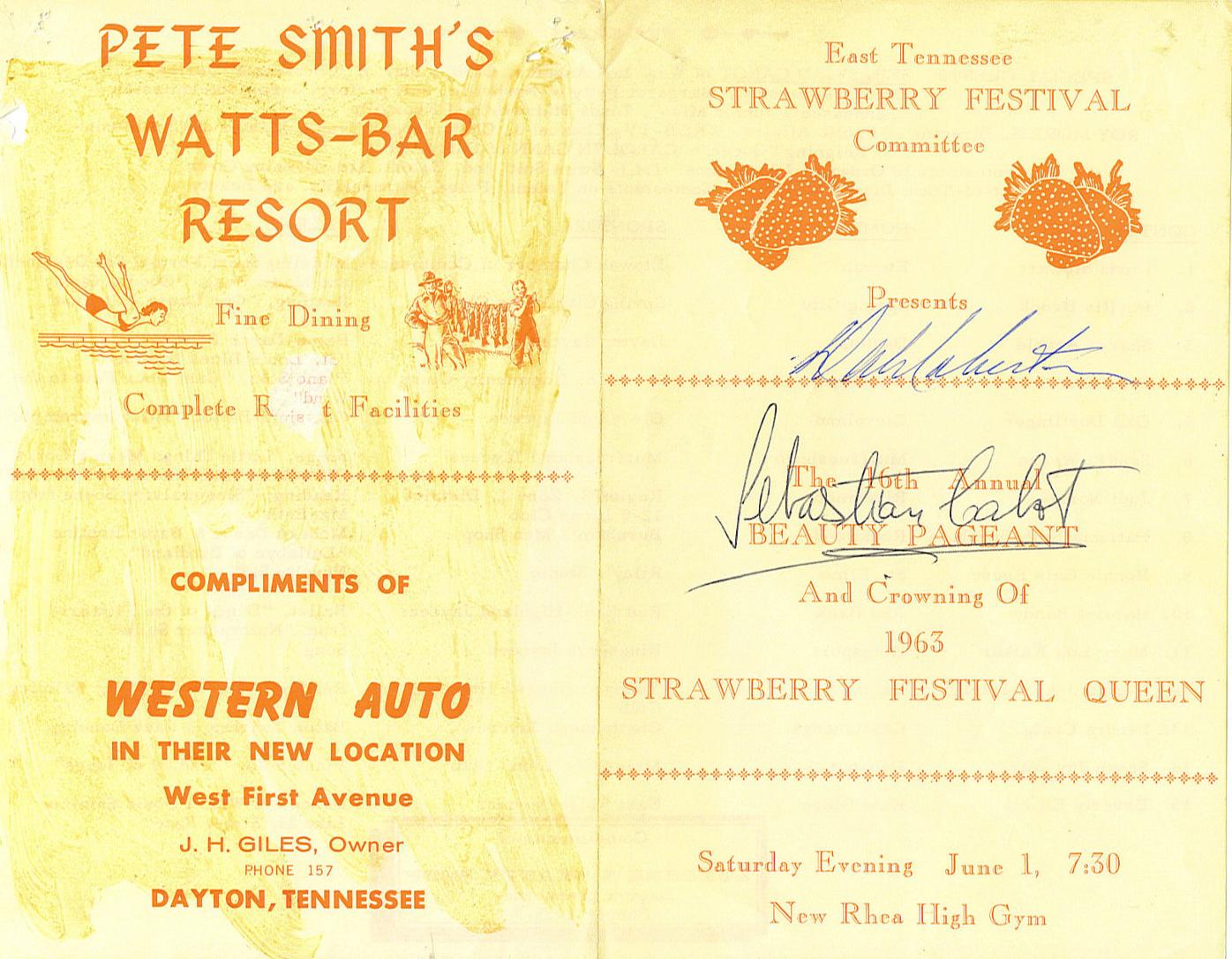 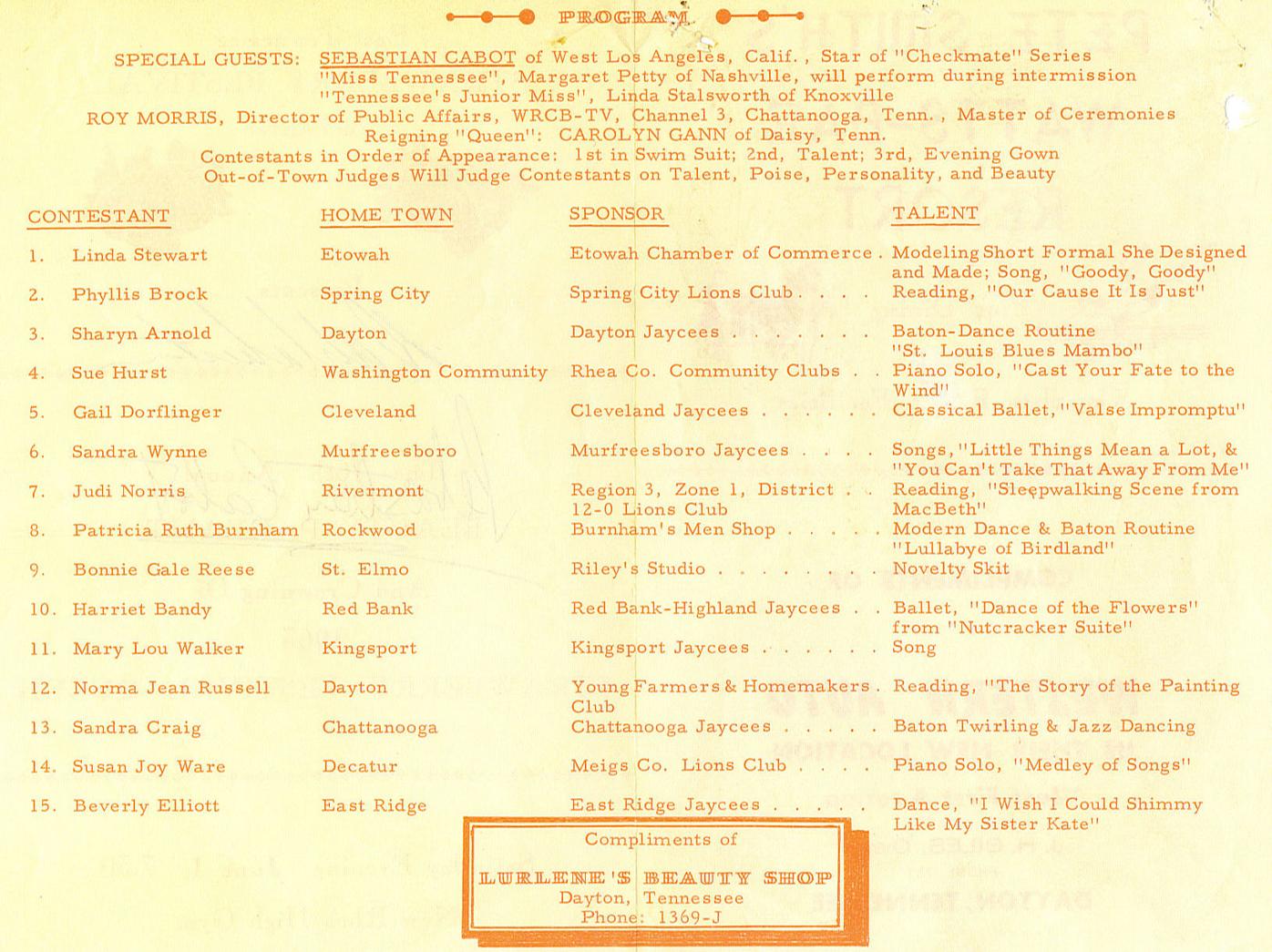 It’s strawberry time in Tennessee! During this time of year all of Rhea County would be getting ready for the Strawberry Festival, if times were normal. However, this year is not normal since the Coronavirus has invaded our lives and disrupted our livelihood. Since that event has happened, we have just had to remember the past festivals and the good times that were had. When the weather turned warm and berry fields were white with blooms, we knew it would soon be time for the strawberry festival in Rhea County. Strawberry farming was a leading industry in Rhea County during the 1890’s and early 1900’s, with the berries being shipped as far away as Ohio and Chicago. Therefore, it is not surprising to find out that a celebration of the strawberry industry was a “big deal!”

The Strawberry Festival used to be called the East Tennessee Strawberry Festival in the earlier years and celebrated the fact that Rhea County was one of the largest producers of strawberries in the country at one time. Even though the sweet, red berry is no longer the largest crop, the strawberry festival is still a celebrated tradition. The festival lasted only one day when it began in 1947. Recently the festival lasted for a few days and included events for the whole family. Sponsors for this event have been the Lions Club, the American Legion and, for the past number of years, the Chamber of Commerce.

The parade was usually held on Saturday afternoon during festival week, with the time varying from 1-2 P.M, depending on the year and the weather. Floats, dignitaries, bands, motorized vehicles and animals have all made up the past parades. At first, the attendance was sparse, but built up to very large crowds of more than 15,000 during the years. Paul “Hambone” Todd led the parade for more than thirty years until his death in 1985. When we saw “Hambone” coming down the street, we knew the parade was beginning!

A strawberry ball was held at Elliott’s Skateland during the sixties, along with teas, a hamburger fry, picnics and other types of entertainment for the queen contestants. These contestants came to Dayton from all parts of East Tennessee and stayed for most of the festival time. The Queen’s Contest served as a qualifier for the Miss Tennessee Pageant, so there were plenty of pretty girls and lots of excitement. An emcee was always on hand for the contest; one of the most frequent being Roy Morris, a well-known TV personality who worked for WRCB television station in Chattanooga. Don Welch, a product of Dayton, who was also a Chattanooga TV personality, even came “home” to lend his expertise as emcee of the pageant.

During the 1979 festival, history was made with the first black queen being crowned. Then in 1991, the Strawberry Festival Queen Contest ended. The sponsors decided to drop the pageant, since they felt the competition was keeping local girls from entering, and the money was going to sponsor a Miss Tennessee qualifier from outside Rhea County. This pageant then became the Rhea County Young Woman of the Year Scholarship Contest. Shortly after that, it changed once more to the Rhea County Junior Miss Contest.

It was always an exciting time for those attending the Strawberry Festival. The parade and queen’s pageant were highlights, but the carnival was where most children and young people wanted to go. It was always great fun to ride all the rides you could and stay as long as you were allowed.

A favorite memory of many attendees was the Strawberry Festival of 1963. The celebration had a “Hollywood” theme that year! Actors Dale Robertson and Sebastian Cabot attended the activities and were the grand marshals for the parade on Saturday afternoon. Sebastian Cabot was the butler on the television show, “Family Affair” and also appeared in a remake of the movie, “Miracle on 34th Street.” Dale Robertson appeared on the television series, “Tales of Wells Fargo” and later replaced Ronald Reagan on “Death Valley Days.” (Both actors are now deceased.) This event with REAL Hollywood actors was very exciting for most people who attended the parade and/or the Queen Pageant. Both actors were also judges Saturday night for the Queen Pageant, which was held in the (new at that time) Rhea Central High School gym. (I still have the program from that night of June 1, 1963 with the signed autographs of both actors.)

All we can do for this year’s Strawberry Festival is call upon our memories, and hope that next year will bring about the “real” thing! In the meantime, remember to study the past in order to live in the present and prepare for the future.

Pat Guffey can be reached at pat459@charter.net