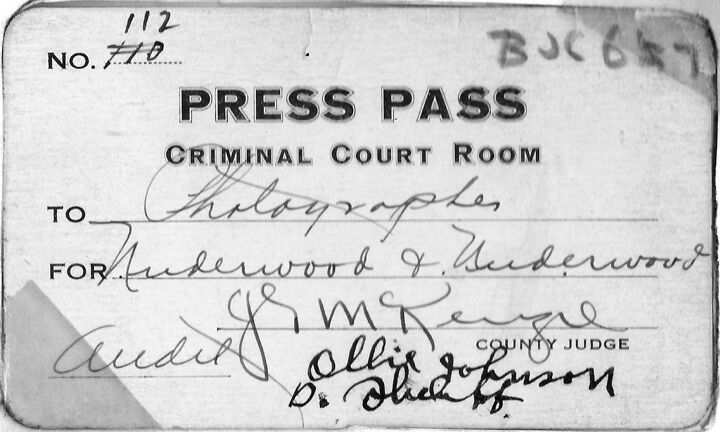 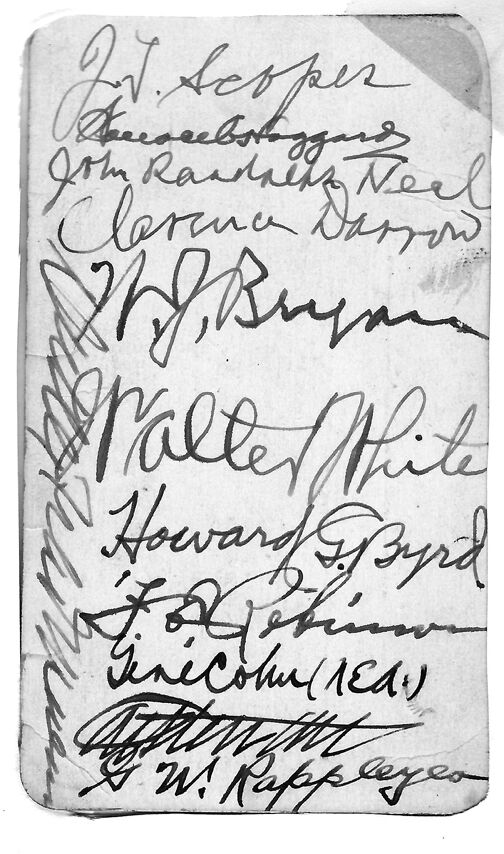 Many of us are used to wearing a badge of some type which shows that we belong in a workplace or a name tag so that we can be part of a group. However, how many of us can say we have ever held a press pass dating to the Scopes Trial of ninety-four years ago? It just happens that an item given to the Rhea Heritage and Scopes Trial Museum in the Rhea County Courthouse is a press pass numbered 112, once belonging to photographer Henry W. Seavey. This pass was given to the Museum by Gary Stark, of Spring Grove, Illinois, in honor of his son and in memory of his grandfather. Gary’s son, Henry, is named for Seavey.

Henry W. Seavey was born in 1899, and grew up in Momence, Illinois, which was approximately fifty miles South of Chicago. He spent most of his adulthood in Brookfield, a suburb of Chicago. Seavey had two daughters, one of which was Carolyn, the mother of Gary Stark, his grandson. Also, Seavey was a World War I veteran, and died in 1989 at age ninety. He worked for Underwood and Underwood, and then formed his own photography company with a partner. Later, he taught photography at the Art Institute of Chicago. Basically, all of his work was in black and white film, and he was quoted in a Chicago Tribune article saying, “In my day we didn’t just take pictures, we made them.” Naturally, this was before digital photography. Fishing was one of his hobbies, and since air travel was not common during his career, most of his traveling was done by train. Not only did he cover the Scopes Trial in 1925, he also covered the Loeb and Leopold Trial in 1924. In addition, Seavey was a photographer at the 1933 World’s Fair in Chicago, the 1927 Dempsey/Tunney boxing match at Soldiers Field in Chicago and the 1932 World Series between the Chicago Cubs and the New York Yankees. (The Yankees won the series.) During that series he photographed Babe Ruth and Lou Gehrig, two of the Yankee Hall of Famers. Needless to say, Henry Seavey had an outstanding career!

During the Scopes Trial of 1925, press passes were commonly worn to identify those who were members of the press so they could gain entry to the courtroom during the trial. F.E. Robinson, school board chairman, had retained the services of Underwood and Underwood to document the trial proceedings, and their work became the primary source of trial images used in the Scopes Trial Museum and in the historical collections of the University of Tennessee and Bryan College.

Historians note that press passes still exist today from famous trials; however, very few are signed by trial participants. Therefore, this one is very significant, and remains an important part of our history. Among those who autographed the pass are the defendant, John Scopes; defense attorneys, Clarence Darrow, John R. Neal and Dudley Field Malone; Attorney General, Tom Stewart; Prosecuting Attorneys, William Jennings Bryan, Wallace Haggard, and Gordon McKenzie; School Board Chairman, F.E. Robinson; and Superintendent of Schools, Walter White. This press pass is framed and has a place of residence in the Scopes Trial Museum, located in the basement of the Rhea County Courthouse.

When we view this press pass we are looking at a piece of history, which spans a time of ninety-six years. As your Rhea County Historian, I would like for you to remember that this part of our history should be studied to help us learn from the past so that we can live in the present and prepare for the future.

Pat Guffey can be reached at pat459@charter.net