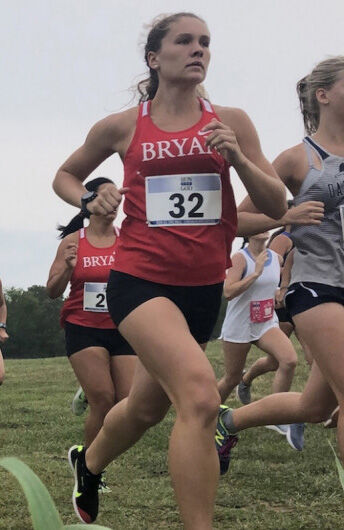 Pictured, is Bryan College Lady Lion cross-country runner, Sarah Welch (32), competing in the first meet of the 2020 season in September. 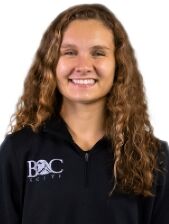 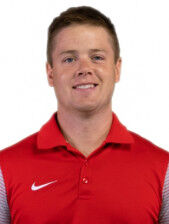 Pictured, is Bryan College Lady Lion cross-country runner, Sarah Welch (32), competing in the first meet of the 2020 season in September.

The event at UNG was a 5K, where Welch finished sixth overall with a time of 18:56, giving her the new school record at Bryan. Jessica Stockton previously held the old record, with a time of 19:03.

Welch was surprised when she set the record, having no prior knowledge of the old record heading into the UNG meet.

“It was really exciting,” said Welch. “I wasn’t really expecting to do that, and I honestly didn’t know what the school record was, so, it was a surprise.”

Getting to stay close to home and run for the Bryan track and cross-country teams has meant a lot to Welch, and her decision played a big part in her overall plan.

“And, I just like being close to home,” continued Welch. “I didn’t always plan on staying close to home, because I had looked at other schools. But, I just felt like this is where God wanted me to be, and coach [Josh] Bradley is just a really great coach. He’s very encouraging and cares about more than just how I perform athletically. He cares more about how I’m doing spiritually and emotionally, so, just having him, is really cool and he’s a really great coach.”

Fifth year Bryan track and cross-country coach, Josh Bradley, recruited and signed Welch three years ago and was excited to add her to the Lady Lions’ roster.

“She signed with me three years ago, and we recruited her, heavily, so obviously very excited to get her to sign with us,” said Bradley. “We were more excited for the track, with the 800-meter and the 1-mile, but she’s been training for cross-country and doing well.

“Her training during COVID-19 was very solid,” continued Bradley. “ She’s definitely very competitive and she is self-driven and self motivated and that’s a big part of who she is. She came [to Bryan] more focused on the track, but also wanting to run cross-country, wanting to help the team, not knowing exactly where she would land with that.

“Through hard work and three years of consistent, day in and day out work, she has essentially kind of put herself in position to be the team leader, as far as place-wise, obviously, on our cross-country team and also, she’s done a really good job on the track as well,” added Bradley. “She’s an all-conference runner twice for indoor track and once for outdoor track. So, she’s done a fantastic job for us on the track and also now, we think she can do really well when it comes to our conference championships meet this Saturday.”

Prior to arriving at Bryan, Welch ran track and cross-country for longtime and highly successful RCHS coach, Steffan Holder, and credited him for much of her success.

“My experience at Rhea County and running for coach Holder was really good,” said Welch. “He’s also a great coach. He’s always been someone that I look up to, and he’s supported me through a lot of stuff. He’s helped me get to where I am, so I’m really thankful for him.”

During the remainder of Welch’s career at Bryan, she strives to go beyond the conference championships, which were held this weekend on Saturday, Nov. 14, at Montreat College, near Asheville, North Carolina. Results were not available at press time.

“We have our conference championships coming up this weekend, so I’m hoping to qualify for nationals,” said Welch about her postseason goal. “If I race well, and similar to the way I did at the last race, where I set the record, I should make it.”

The top two teams and the top six individual runners at the conference championships will qualify for the national meet, which will be held in Iowa, April 2021.

Welch cherishes her overall experience at Bryan College, which has more to do than just her athletic career.

“I talked a lot about running, but I just really like Bryan as a school,” said Welch. “From my professors, to friends that I’ve made, it’s just a great atmosphere here. A lot of the coaches and professors here are really concerned about helping athletes and students to grow spiritually and grow closer to the Lord, so I really like that about this school.”

Welch is majoring in Exercise Health Science, with a focus in Physical Education, as she stated she wants to become a P.E. teacher and coach as well.