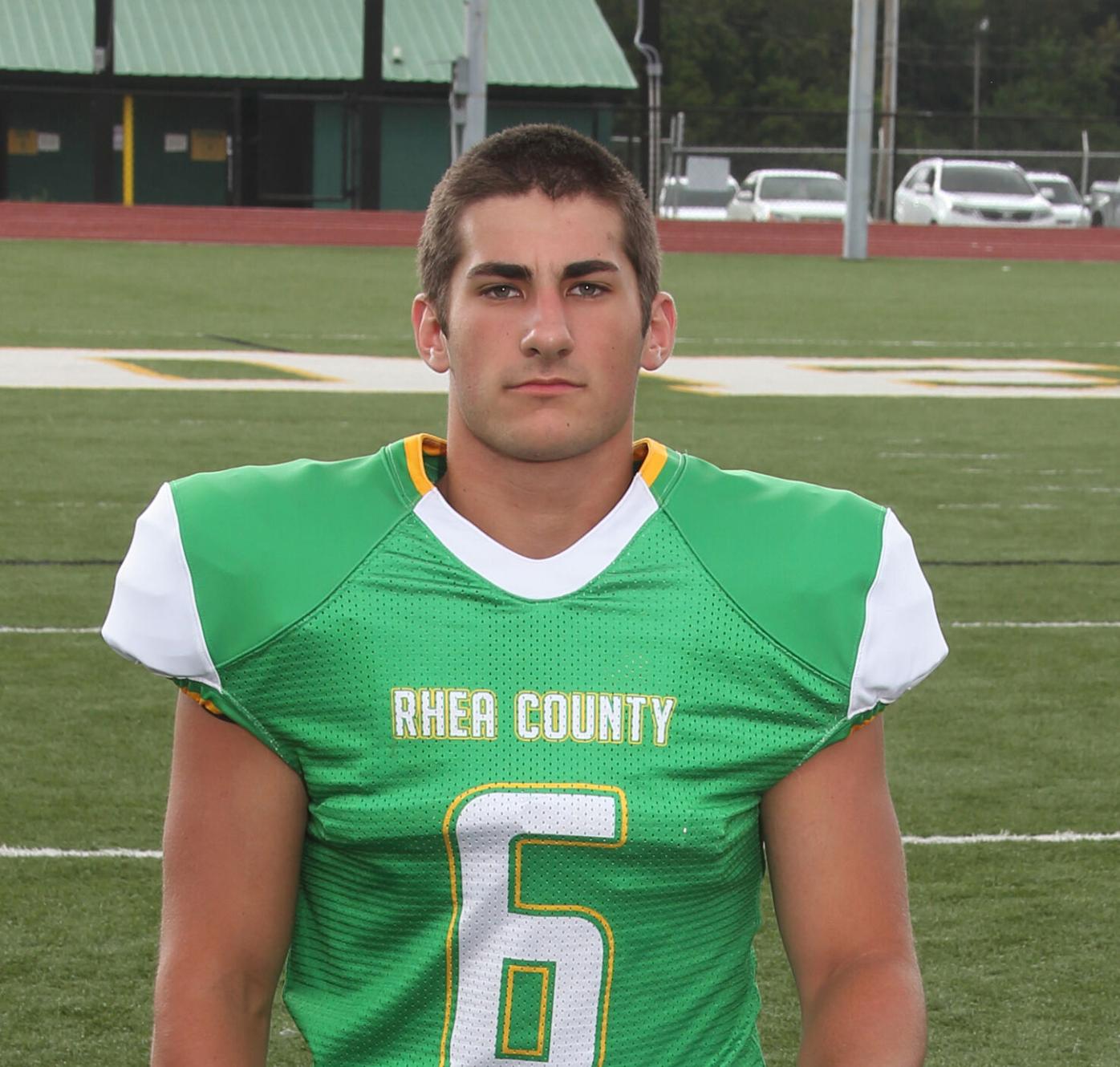 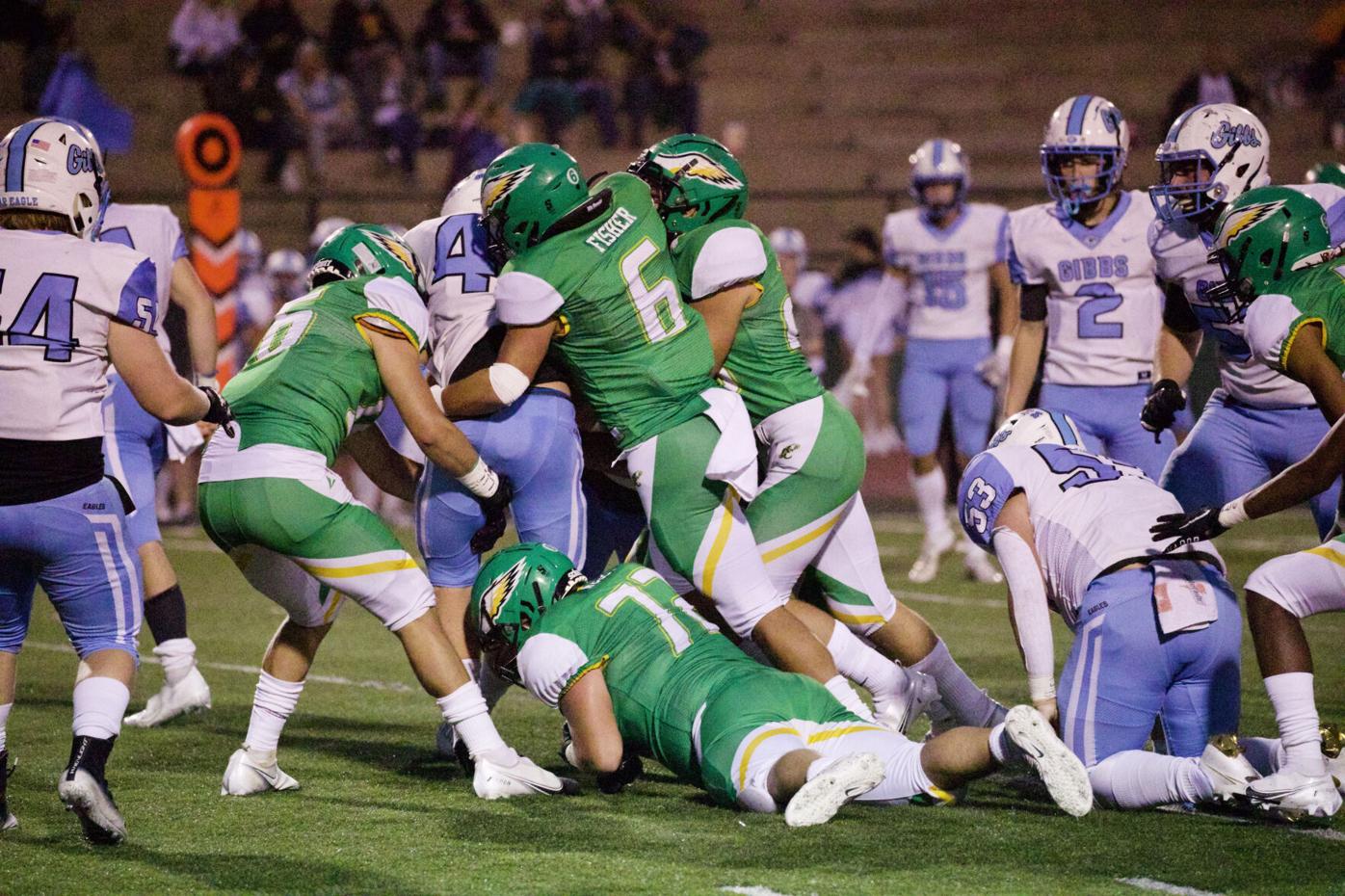 Pictured, is Drew Fisher (6) and other members of the Rhea County High School Golden Eagle defense taking down a Gibbs High School runner during the Eagles’ 34-27 home win on Friday, Sept. 25. The win improved Rhea County’s season record to 5-0. Fisher was named to the Tennessee Sports Writers Association’s (TSWA) Class 5A All-State Team on Monday, Dec. 28.

Pictured, is Drew Fisher (6) and other members of the Rhea County High School Golden Eagle defense taking down a Gibbs High School runner during the Eagles’ 34-27 home win on Friday, Sept. 25. The win improved Rhea County’s season record to 5-0. Fisher was named to the Tennessee Sports Writers Association’s (TSWA) Class 5A All-State Team on Monday, Dec. 28.

Earlier in December, Fisher was tabbed the 2020 Region 4-5A Defensive Player of the Year, as he helped guide the Golden Eagles to a region championship, a second round playoff appearance and an overall season record of 10-2. As a sophomore in the 2019 season, Fisher earned Region 4-5A Linebacker of the Year honors.

Fisher’s defensive stats for the 2020 season included 120 total tackles, 69 solo and 51 assisted, 25 tackles for loss (TFL), which included five sacks. He also had one forced fumble and one interception on the year.

As one might imagine, Fisher was excited upon hearing the news of his most recent earned accolade.

“It feels amazing,” said Fisher about his All-State status. “It’s something that clearly I won and I worked for, and hopefully, more to come.”

Putting the 2020 season in perspective as a whole, especially beginning a season with so much uncertainty due to COVID-19 concerns, Fisher is proud of his team’s achievements. Fisher and the Eagles also had a teammate, Landry Jolley, pass away earlier in the summer. So many obstacles hit Fisher and the Eagles this season, but they forged ahead with vigilance to overcome the adversity.

“With everything going on around us, the loss of a friend [Landry Jolley], and the whole corona thing and everything else, it felt amazing to have as good of a season as we did,” explained Fisher. “Of course, I feel like we should have or could have done better than we even did. But, with everything going on, I think we prevailed in greatness, had a great season and I loved every bit of it.”

Fisher wore jersey No. 44 last season, but was honored when Landry Jolley’s father, Kevin Jolley, asked Fisher to wear No. 6 this season, in honor and memory of Landry, which had been his number.

“It was huge. Whenever Kevin, Landry’s dad, asked me to wear No. 6, it was one of the greatest honors and it meant the world to me,” said Fisher. “Wearing No. 6 helped me a lot and it helped me play harder, because I was playing for more of a reason.

“It’s just something you have to represent well, that you have to carry well, and it means the world to me,” continued Fisher. “In the Ooltewah game, whenever I got the pick (interception) and the penalty that followed, because they thought I was taunting their fans, I was actually pointing up in the stands at Kevin. Right before I got the pick, he caught my attention and said something like, ‘make a play,’ and then I got the pick on the next play, and I pointed up at him. That was my favorite part of the whole season.”

Fisher stated one of his future goals as an Eagle during his senior season next fall is to be the first team in RCHS history to win a state championship.

"He's one of the best coaches and people I've been around, and wouldn't be in this position without him," said Fisher about Coach Campbell.

Fisher’s message through the season, now and in the future is clear, “It’s all for 6, always.”

“It couldn’t happen to a better kid. He’s a team guy all the way,” said Pemberton. “He works hard in the weight room. Everything he does, he’s all in. He led us in tackles this year, or was at the top, had a ton of big plays and also played some tight end for us.

“I thought he would have a good chance of making All-State because he was Defensive Player of the Year in our region, so I’m very happy for him and proud of him,” continued Pemberton.

Fisher’s All-State selection makes back-to-back years a Golden Eagle linebacker was chosen, as 2020 RCHS graduate, Eagle for Life (EFL) Bradley Goodwin, made the elite list a year ago. Goodwin was also named the 2019 Region 4-5A Defensive Player of the Year. Goodwin signed and joined the UTC football roster this fall as a Preferred Walk-on (PWO).