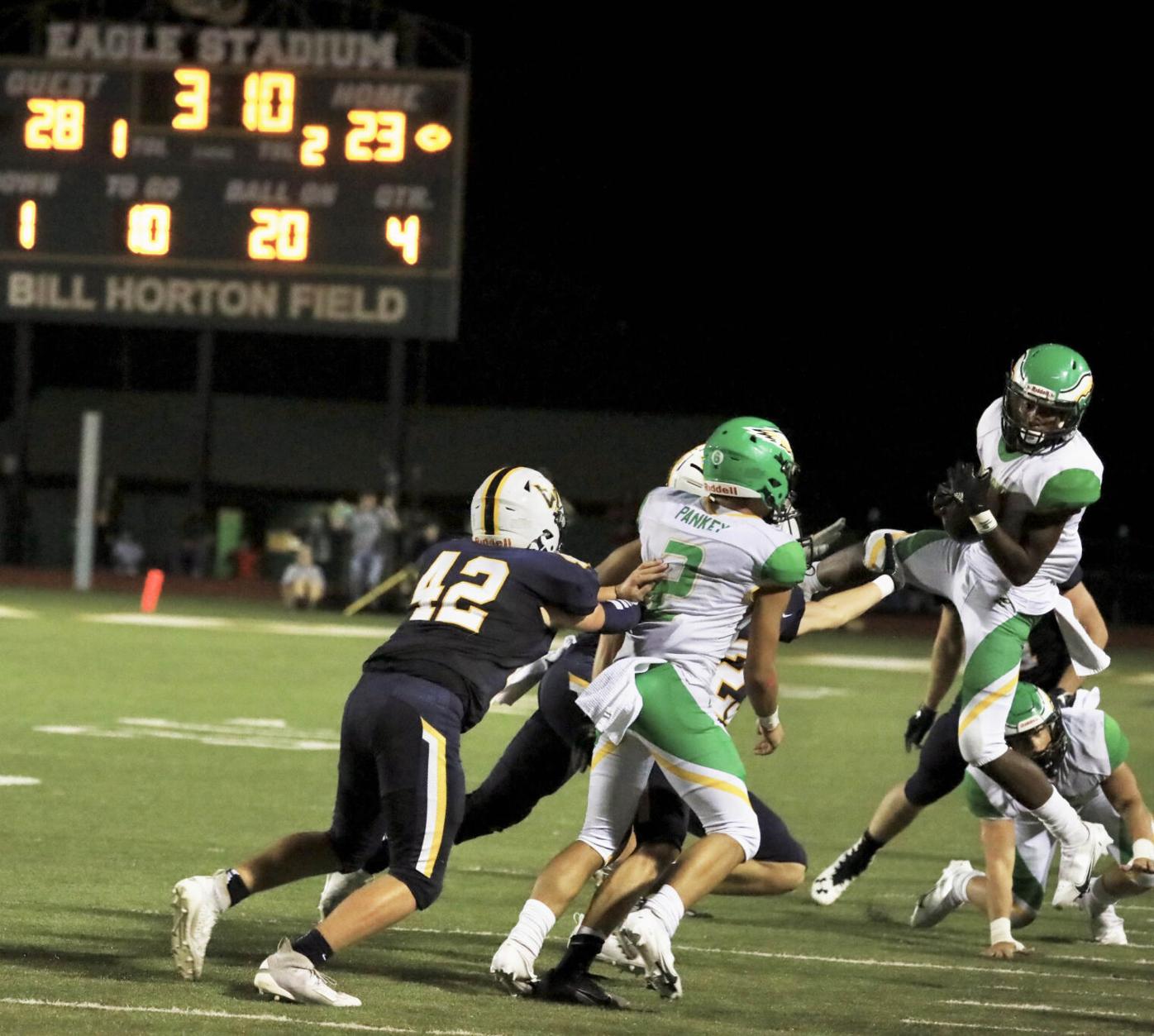 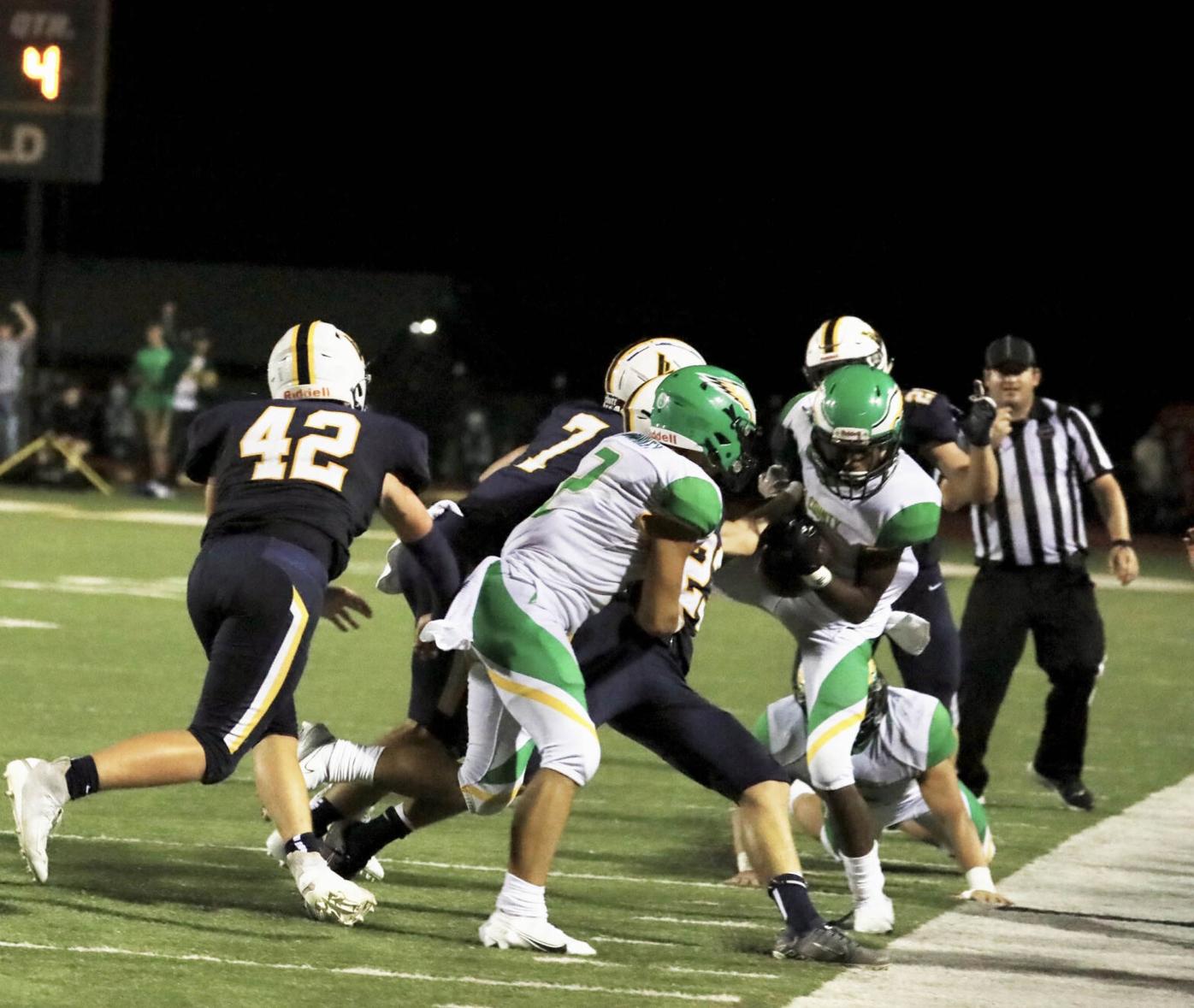 Pictured in all three photos is RCHS junior Gavin Roddy (5), going up to recover the onside kick from Cole Ruehling during the Eagles’ 31-28 comeback win over Walker Valley. In this photo, Roddy clearly gets his foot in bounds for the Eagles. 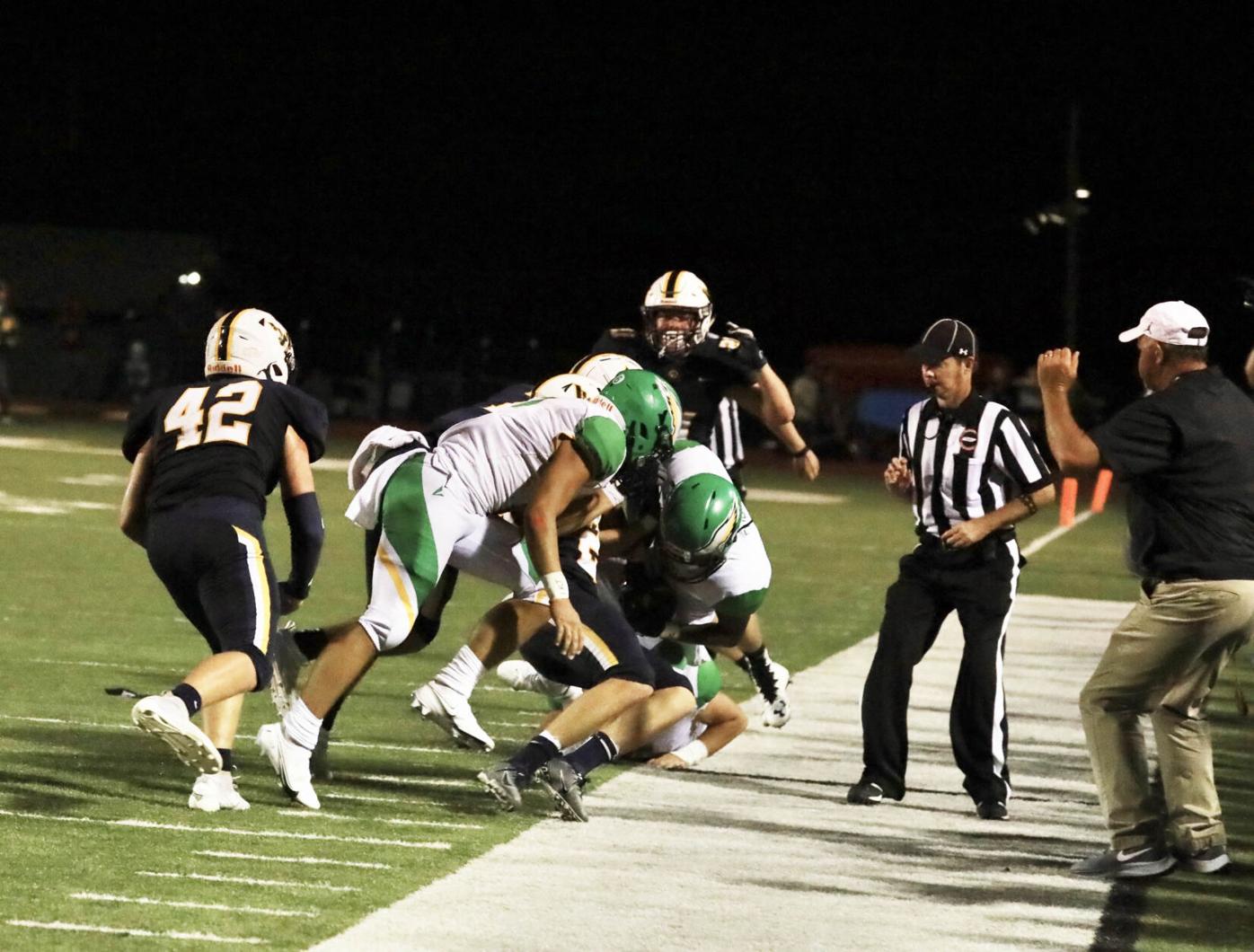 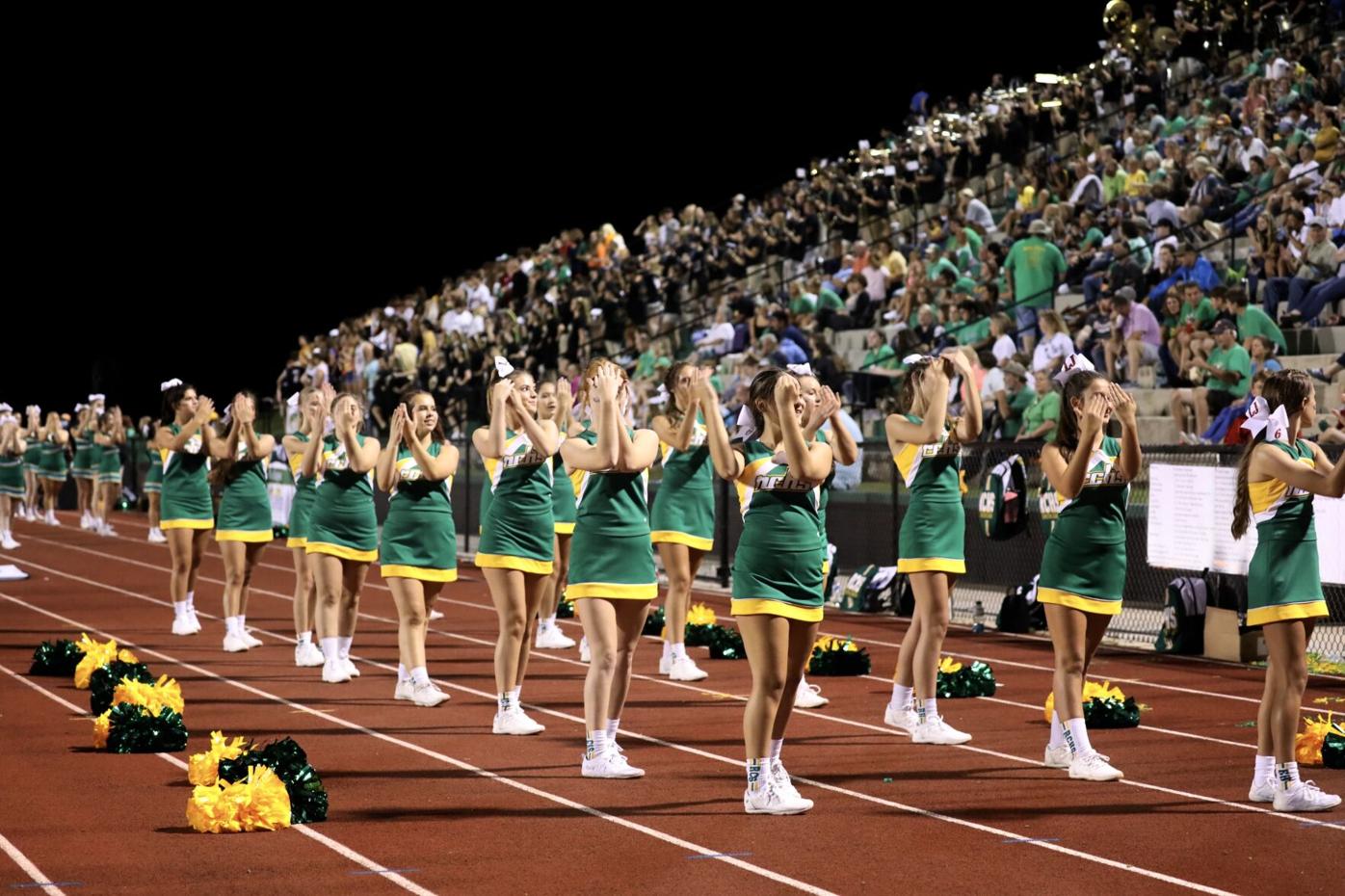 Pictured are members of the 2020-21 RCHS cheerleading team performing a cheer during Friday’s 31-28 home win over the Walker Valley Mustangs.

Pictured in all three photos is RCHS junior Gavin Roddy (5), going up to recover the onside kick from Cole Ruehling during the Eagles’ 31-28 comeback win over Walker Valley. In this photo, Roddy clearly gets his foot in bounds for the Eagles.

Pictured are members of the 2020-21 RCHS cheerleading team performing a cheer during Friday’s 31-28 home win over the Walker Valley Mustangs.

When asked what was one of the most thrilling comebacks ever witnessed in a football game, some fans may think about John Elway and ‘The Drive’, Joe Montana to Dwight Clark for ‘The Catch,’ but closer to home, and most recently, many local fans will say it was the night the Rhea County High School Golden Eagle football team came back from a 14-point deficit in the last five minutes of the fourth quarter to beat the Walker Valley High School Mustangs.

The Golden Eagles trailed 28-14 in the final minutes of the fourth quarter, but rallied to score 17 unanswered points, stunning the visiting Mustangs 31-28 at Eagle Stadium/Bill Horton Field on Friday, Sept. 4.

In the first Region 4-5A matchup of the season, the Eagles entered the game 2-0 to Walker Valley’s 1-1 mark.

After the Eagles deferred to the second half, the Mustangs’ Brody Swafford returned the opening kickoff 85 yards for the score with 11:42 left in the first quarter. After a bad snap on the PAT attempt, the Walker Valley holder attempted a pass for a 2-point conversion try, but Rhea linebacker, Eli Johnson, broke up the pass, and the Mustangs led 6-0.

The Eagles recovered quickly with a 9-play, 65-yard touchdown drive that ended with a 3-yard run from senior wingback, Dalton Hampton. Along the drive, Rhea quarterback, Kaleb Martin, completed 3-of-4 passes, two to Jadden Pankey, which included grabs of 13 and 29 yards. Martin also found Jayden Goodwin for a 10-yard catch. With the made PAT by Cole Ruehling, the Eagles led 7-6 with 8:23 left in the first quarter.

The Mustangs answered with another scoring drive, capped off with a 1-yard quarterback sneak from Tucker Pope. With the made PAT, Walker Valley reclaimed the lead and went up 13-7 with 2:02 left in the opening quarter.

On the next two offensive series, both teams exchanged punts. Following Walker Valley’s punt, the Eagles took over at their own 35-yard line. On third down and seven, from the Rhea 38-yard line, the Mustangs’ Spencer Jackson picked off a Martin pass for Martin’s first and only interception of the night.

Walker Valley capitalized on the Eagle turnover by marching 48 yards in seven plays to pay dirt, as the Mustangs went up 20-7 with 7:05 left before the half.

The teams exchanged a couple more unsuccessful offensive series, and the Mustangs carried a 20-7 lead to the locker rooms.

In the opening drive of the second half, the Eagles marched 76 yards in 18 plays, covering eight minutes and 15 seconds, ending when Martin connected with Nathanial Ferry for a 24-yard TD pass with 3:38 left in the third quarter. After the made PAT from Ruehling, the Eagles trailed 20-14.

The Mustangs responded with another score, this time, covering 62 yards on nine plays, ending with a 27-yard TD run by Jackson. Walker Valley opted to go for a 2-point conversion and succeeded with Pope connecting on a pass to Daniel Denton. The Mustangs led 28-14 with 11:51 remaining in the fourth.

Rhea’s defense, which gave up 164 passing yards in the first half, held Pope and the Mustangs to only 50 yards in the second half. After holding Walker Valley again, the Eagle defense forced another punt. From the Mustangs’ 26-yard line, during the punt attempt, a very bad snap that seemed to go six feet over the punter’s head, and landed in the back of the end zone, and eventually out of the end zone, resulting in a safety and two more points for the Eagles. With 5:05 left in the game, Walker Valley led 28-16.

Despite the 12-point deficit with just over five minutes remaining, fans seemed to sense a slight shift in momentum, in favor of the Eagles. Gavin Roddy returned the ensuing free kick by Walker Valley to the Rhea 42-yard line with 4:48 left. The first three plays of the drive were completed passes from Martin. Pankey caught the first for nine yards, while Goodwin snagged one for 14 yards and Martin went back to Pankey for a 32-yard gain to the Mustangs’ 3-yard line. Three plays later, Martin crossed the goal line on a QB sneak for the TD run. After the Ruehling made PAT, the Eagles trailed 28-23 with 3:10 left in the game.

In perhaps the play of the night, on the ensuing kickoff, Eagle head coach, Mark Pemberton, elected to try an onside kick. In what seemed to be a perfect textbook onside kick from Ruehling, getting the right bounce and placing the ball exactly where it had to be, near the Eagle sideline, Gavin Roddy, in the words of Pemberton, “Went up the ladder and came down with the football.” Roddy’s right place, right time efforts, which turned out to be game heroics, set up the Eagles in prime position at the Walker Valley 48-yard line with 3:08 remaining in the game.

With full momentum on their side, Martin led the Eagles on a 6-play scoring drive, ending with another 1-yard TD run by Hampton. Along the drive, Martin went 2-of-2, hitting Ethan Davis on a screen for 14 yards and Goodwin on a 28-yard pickup to the Mustangs’ 8-yard line. Martin went 6-of-11 for 121 yards in the second half, with the majority of them in the fourth quarter. There was a fumbled snap on the 2-point conversion attempt, but Martin alertly picked up the loose ball and powered his way across the goal line for the conversion. With 1:00 showing on the clock, the Eagles led 31-28.

On the ensuing kickoff and drive, which started at the Walker Valley 30-yard line, the Mustangs drove to their 41-yard line. Facing a third down and long, Walker Valley was forced to pass. Rhea’s Amari Roddy went up above the would be Mustang receiver and came down with his second interception of the night to seal the Eagles’ victory with 9.9 seconds left in the game.

From there, Martin and the Eagles went into the victory formation, took the snap and the knee to run out the clock. Perhaps Friday night’s comeback by the Eagles can be referred to as ‘The Kick’ or ‘The Recovery’ or the ‘The Drive Part II.’ Either way, The 2020 Eagles can look back someday and say they claimed one of the most exciting comeback wins in program history.

The ever calm, never panic, Coach Pemberton was extremely proud of his team’s effort to not give up when facing a 14-point fourth quarter deficit. He compared Friday’s comeback to that of the 2014 semifinal game, when the Eagles trailed 28-0 nothing at the half, scored 28 unanswered second half points to tie the game. The eventual state champions, Knox West, edged the 2014 Eagles out that night 35-28, but they never quit.

“It was quite a game, to say the least,” said Pemberton of his team’s remarkable comeback win. “They never surrendered. They just kept battling and kept battling. We needed something good to happen for us, and the snap over the head of their punter got us two points, then we made several plays after that.

“Cole Ruehling made an unbelievable onside kick that was perfect and Gavin Roddy went up the ladder and got it, and he got one foot down in bounds,” continued Pemberton about the much-needed onside kick recovery with 3:08 left in the game. “I knew as soon as we got that onside kick, we were going to win the game, because our kids were enthused, they were excited.

“What a win. That’s one of the best comebacks in the fourth quarter that I’ve seen in a long time, at the high school level, especially here,” added Pemberton. “I’m just really proud of these kids, they never surrendered, and they never gave up hope. Once we had something good happen to us, it just snowballed from there.”

By the numbers — Davis led all rushers with 74 yards on 17 carries. Hampton had 22 yards on 12 rushes, with two TDs, while Ryan Young finished with 11 yards on four totes and Martin totaled 11 yards on six carries and one TD. Martin also had a two-point conversion run. Ferry netted minus three yards on one carry. The Eagles totaled 115 rushing yards on 40 carries. Martin went 9-18-1 in passing for 173 yards and one TD. Pankey had four catches, totaling 83 yards, Goodwin had three receptions for 52 yards, Ferry had one catch for 24 yards and a TD and Davis had one grab for 14 yards. The Eagles tallied 288 offensive yards. The Eagles gained 14 first downs. Gavin Roddy finished the night with 85 yards on three kickoff returns, including one for 56 yards.

Rhea County had no fumbles, while Walker Valley only had the fumbled punt snap, which resulted in a safety and two points for the Eagles. Rhea’s Luke Miller punted three times for a 45.6-yard average.

Leading the Eagles’ defense was Drew Fisher, who had 10 tackles, including a sack. Eli Johnson finished with nine tackles, including a sack and a pass breakup. Austin Brackett tallied seven tackles, as Sir Alloway and Gavin Roddy had six tackles apiece, with Roddy also recording a pass breakup and an onside kick recovery. Justin Woody had five tackles and Isaiah Sales totaled four. Alijah Davis and Amari Roddy had two tackles apiece, with Roddy also recording two INTs and a pass breakup.

The Eagles are 3-0 on the season and will have an open/bye week for Friday, Sept. 11. They will play the Lenoir City Panthers on Friday, Sept. 18, at Lenoir City, for another Region 4-5A matchup. Kickoff is scheduled for 7:30 p.m.

Eagle fans, please be sure to visit our website at Rheaheraldnews.com and our Facebook page to view Coach’s Corner, a new edition to The Herald-News’ sports’ department, which is a video that includes a sit down interview with Coach Pemberton, highlighting Friday night’s action and a look ahead at the upcoming game. The Coach’s Corner video will be posted every Monday evening, or Tuesday morning, so be sure to check it out.