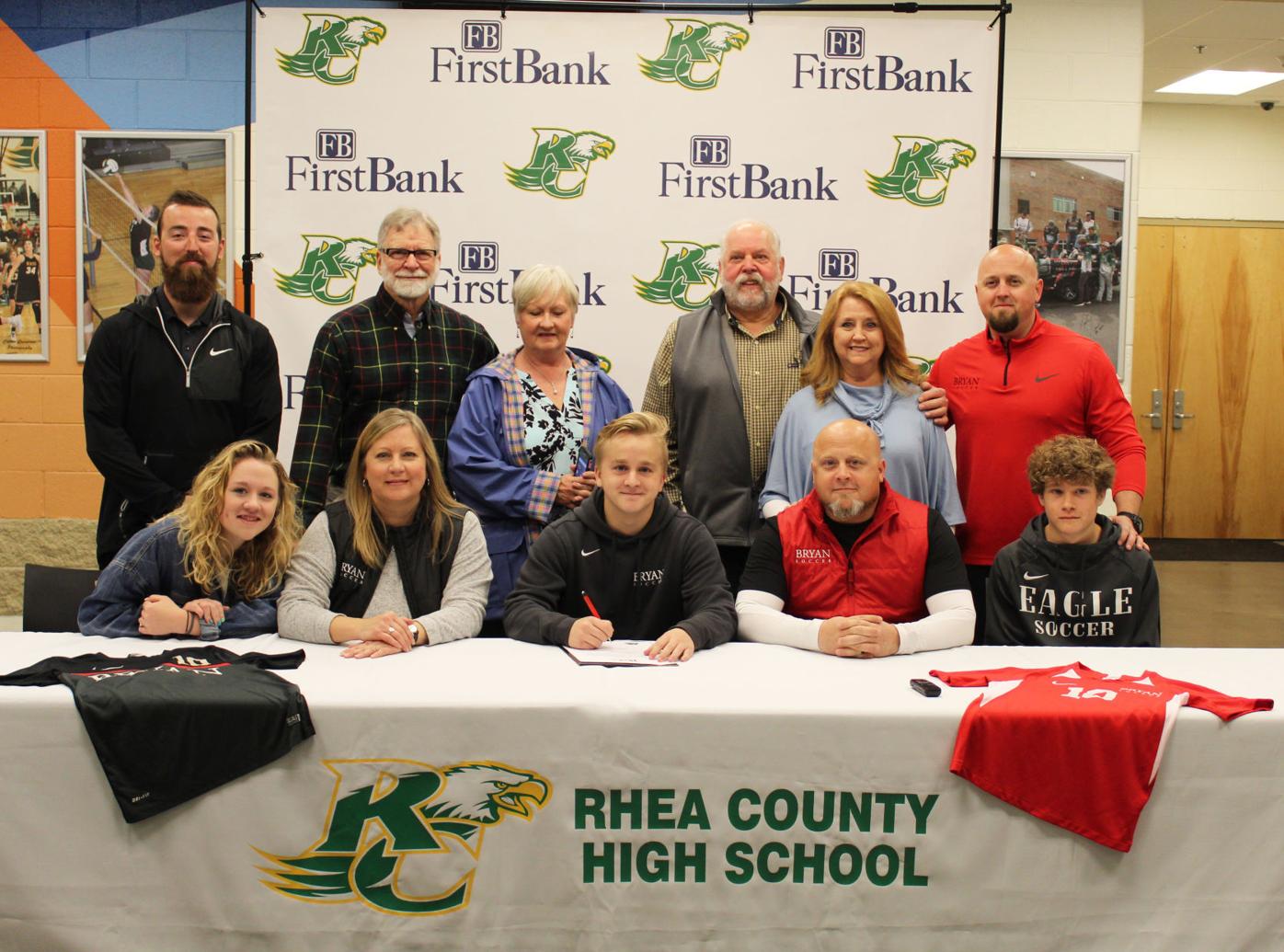 Pictured, sitting and in the middle, is RCHS Eagle soccer player, Landon Davidson, as prepares to sign his letter of intent to play for the Bryan College Lions’ soccer team this fall. Davidson is surrounded by family, RCHS head coach, along with the Bryan College coach, who happens to be his father, Jeremy Davidson. 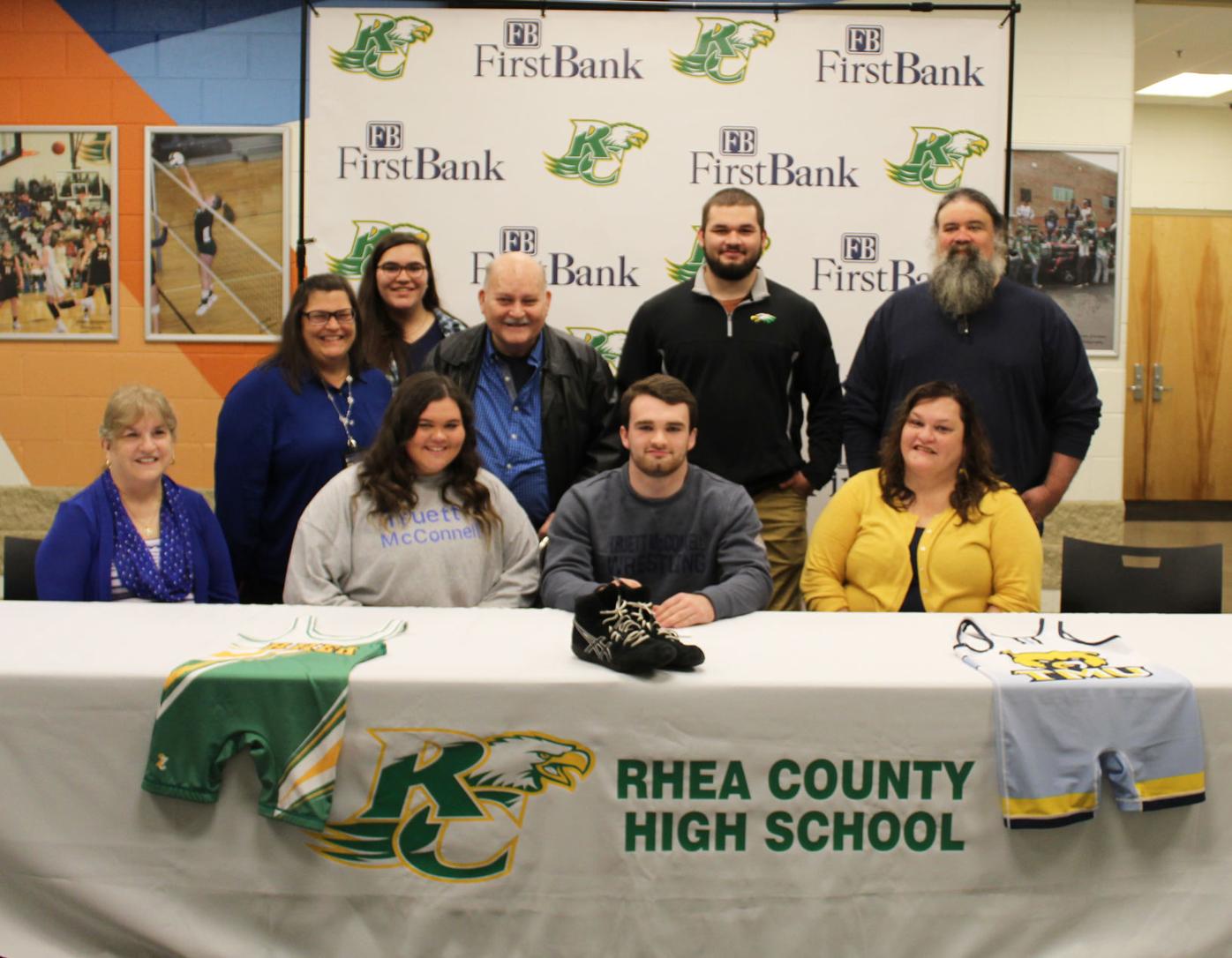 Pictured, is senior RCHS Eagle wrestler, Jacob Scruggs (sitting and center), as he prepares to sign his national letter of intent to wrestle for the Truett McConnell University Bears this fall. Scruggs is surrounded by his family members for his signing. 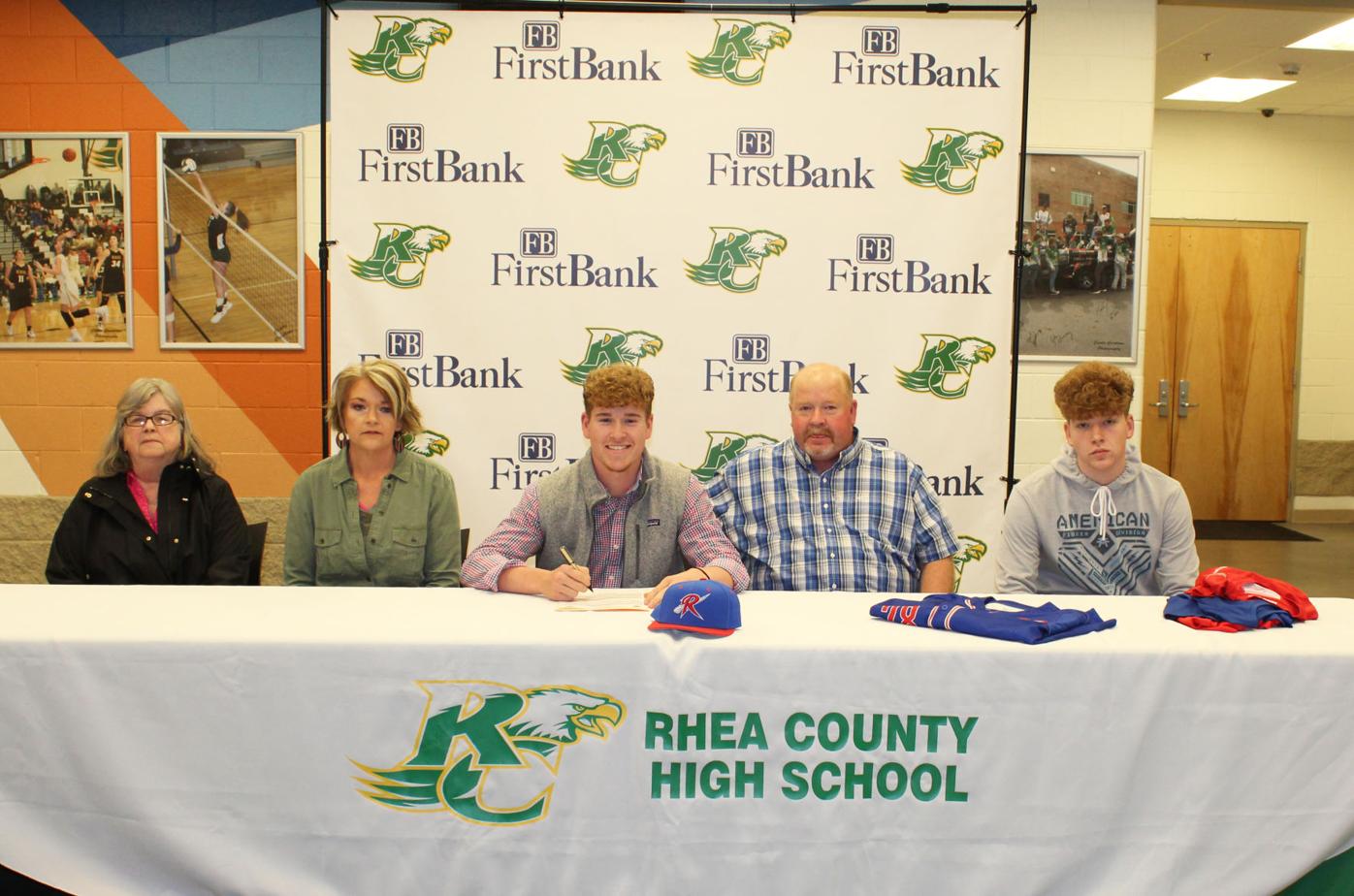 Pictured, is senior RCHS Eagle baseball pitcher, Ricky Guthrie (sitting and center), as he prepares to sign his national letter of intent to pitch for the Roane State Community College Raiders this fall. Guthrie is surrounded by his family members for his signing.

Pictured, sitting and in the middle, is RCHS Eagle soccer player, Landon Davidson, as prepares to sign his letter of intent to play for the Bryan College Lions’ soccer team this fall. Davidson is surrounded by family, RCHS head coach, along with the Bryan College coach, who happens to be his father, Jeremy Davidson.

Pictured, is senior RCHS Eagle wrestler, Jacob Scruggs (sitting and center), as he prepares to sign his national letter of intent to wrestle for the Truett McConnell University Bears this fall. Scruggs is surrounded by his family members for his signing.

Pictured, is senior RCHS Eagle baseball pitcher, Ricky Guthrie (sitting and center), as he prepares to sign his national letter of intent to pitch for the Roane State Community College Raiders this fall. Guthrie is surrounded by his family members for his signing.

Three Rhea County High School (RCHS) Golden Eagle student athletes were added to the growing list of college signees in the 2019-20 school year, as they each signed a national letter of intent on Tuesday, March 10, to play their respective sport at the collegiate level.

Family, friends, loved ones, teammates, coaches, administrators and pastors gathered in the RCHS commons area to show their support of the three college-bound athletes, which included Landon Davidson, Jacob Scruggs and Ricky Guthrie.

Davidson is a first-year student athlete at RCHS, as his father, Jeremy Davidson, is the first-year Bryan College men’s soccer coach. The Davidsons moved to Rhea County from Albany, Georgia last year upon Jeremy accepting the head coaching position at Bryan.

For Landon, who has been coached by his father nearly his entire life and throughout his high school career, including the pair’s most recent school, Sherwood Christian Academy, in Georgia, his college decision was simple.

“All of my high school, until my senior year, I played for my dad, so it will be kind of home, I guess,” said Landon in reference to playing for his father and future collegiate coach. “Obviously, he’s my dad, and we love each other. It’s a struggle sometimes to play for my dad, but overall, he helps me grow the most, and he challenges me the most out of any of the coaches I’ve had, so, I’m really excited.”

Landon plans to study Christian ministries and minor in psychology. He stated one of his goals while on the pitch at Bryan would be to get better at soccer, because it’s one of his passions and he loves playing the game. Landon also hopes to extend his career after college.

“If God has it in his will and plan for me, hopefully, I can take the next step outside of college, and use Bryan as a stepping stone and maybe have a later future soccer career,” said Landon about furthering his post-college soccer career.

RCHS head coach, Justin Smith, has appreciated the opportunity to coach Landon during his first year at RCHS, as well as his senior season.

“We haven’t had the opportunity to see all he can do yet, but we can tell he’s skilled,” said Smith of Landon. “We’re excited to see what he can do [on the field].

The elder Davidson, Jeremy, and Landon’s future Bryan College coach was appreciative to RCHS, in particularly, to coach Smith and the team, for convincing Landon to continue his soccer career at RCHS.

“A quick thank you to Rhea County,” said Jeremy Davidson. “Landon was really prepared to give up soccer when we moved here. Your influence, Justin [Smith] and guys, you all’s influence convinced him he wants to continuing playing, so I’ll be forever grateful to all of you guys for that.

I’m proud of him, and obviously excited, and look forward for the opportunity to get four more years of harassing him and giving him a hard time on the field,” added an emotional and jovial, Jeremy Davidson. “I’m excited to see what he’s going to do off the field as much as what he does on the field, so I’m looking forward to next year and thank you all for this opportunity.”

The second RCHS student athlete to sign on the day was Scruggs. He has been a multi-sport athlete while an Eagle, but made the tough decision to solely focus on one sport his senior year—wrestling.

“It feels pretty good. I’m not going to lie,” said Scruggs about signing a wrestling scholarship. “I never imagined myself signing to wrestle in college. After I qualified for the state high school wrestling tournament as a junior, I started to really focus on wrestling. I ended up quitting football as a senior to focus on wrestling.

And then, God gave me the idea, like, ‘hey I want you to go wrestle in college,’ so I just went with it,” added Scruggs on what led to his decision to further his wrestling career. “

Scruggs had planned on competing in a national wrestling tournament held in late March, in Virginia Beach, Virginia, but due to the precautionary measures taken by the entire world, especially the sports’ world, to slow the threat of the COVID-19, the tournament has been canceled.

First-year Eagle wrestling coach, Jace Greene, lauded Scruggs for taking on the responsibility as one of the leaders on this year’s team.

TMU head wrestling coach, Patrick James, is looking forward to working with Scruggs, and was drawn to him for three important qualities.

“I’m super excited, and Jacob is exactly the kind of guy I’m looking for our team next year,” said James. “I started thinking about the kind of guys I wanted to come into our recruiting class for next year. I wanted guys who loved the sport of wrestling, guys that knew how to put hard work in the classroom and guys who had character and are leaders. I think those three things describe Jacob really well, and I’m looking for him to come in next year and make big waves on our team, and to put us on a great path for this program going forward.”

Scruggs plans to study elementary education or possibly secondary education in college, in hopes of someday becoming a teacher and a coach.

Truett McConnell is located in Cleveland, Georgia, and they compete in the Appalachian Athletic Conference (AAC), along with such local schools like Bryan College and Tennessee Wesleyan University.

Guthrie was third on the docket for the day of signees to ink his papers, as the multi-sport athlete will have an opportunity to put his abilities to the test on the mound for the Roane State Raiders as a pitcher.

Guthrie is excited and looks forward for the opportunity, as he’s had the dream for quite some time.

“It feels great. I’ve always wanted this opportunity since I was a little kid, to play baseball in college,” said a jubilant Guthrie about fulfilling a life-long dream. “I never thought the dream would come true, but I kept working and the day finally came, so, I’m pretty pumped about it.

Since Roane State is a two-year school, Guthrie has established a goal once his time in Harriman is done.

Prior to the current Eagle baseball season being halted by the essential shutdown of the sports’ world due to the precautionary measures being taken to slow down the spread of COVID-19, Guthrie has posted two wins and no losses on the mound for RCHS.

Eagle head coach, Rusty Ray, praised Guthrie at the signing, as he’s known him for quite some time.

“I’ve known Ricky almost all of his life. I’ve watched him grow up and watched him play, and for him to finally get up here to the high school to me, Ricky has been a joy to coach,” said Ray of being able to coach Guthrie. “Ricky is the kind of kid that will never give you a cross word, and that says a lot about the way he was raised. Ricky is a good kid and I’ve thoroughly enjoyed coaching him. He’s a hard worker, gets after it, and he’ll do whatever you ask him to do. I’m very proud of him and the effort he’s given us.”

“When you have guys like Ricky, who check all of the boxes, as far as character, the work ethic and as far as a future past baseball, he’s already got all of those things envisioned in mind for him,” said Hamsley. “I just want to say, I’m excited to have him, and he’s part of my players now. I love him, and I’m going to take care of him. And, I appreciate you guys for letting me come down here and celebrate this with you.”

Roane State is located in Harriman, Tennessee, and competes in the Tennessee Community College Athletic Association (TCCAA), along with such local schools as Chattanooga State and Cleveland State.