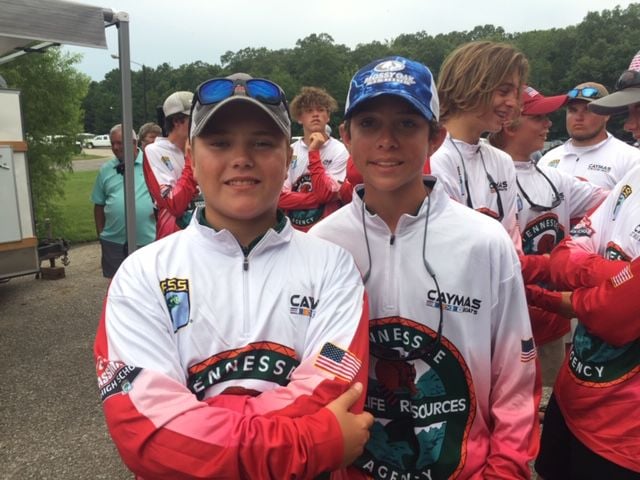 Andon Goins and Blake Wheat are pictured above at the High School National Championship. 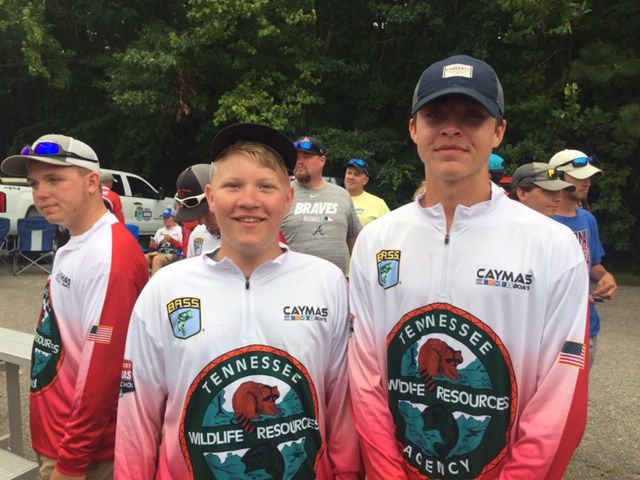 Rhea's Ben Hester and Mason Caldwell are pictured above. 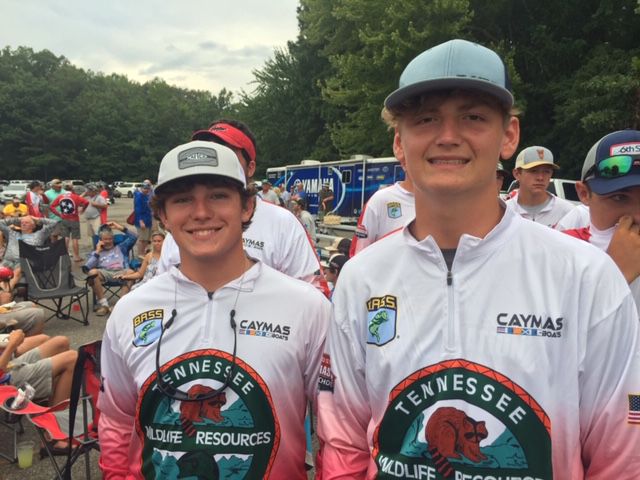 Tanner McClain and Garrett White are pictured above at the Bassmaster High School National Championship.

Andon Goins and Blake Wheat are pictured above at the High School National Championship.

Rhea's Ben Hester and Mason Caldwell are pictured above.

Tanner McClain and Garrett White are pictured above at the Bassmaster High School National Championship.

The dynamic duo out of Birmingham, Ala. earned a $4,5000 scholarship towards their college education with 15 fish weighing a total of 50 lbs., 1 oz. They led wire-to-wire in the tournament and proved last year’s win was no fluke, capturing their second straight National title.

Rhea County Golden Eagle Anglers Garrett White and Tanner McClain had an incredible finish to their day on Lake Guntersville on Saturday, March 30, 2019 to place 28th out of 291 boats and qualify for the 2019 Bassmaster High School National Championship on Kentucky Lake.

The tournament was held on Lake Cumberland and Goins/Wheat won the event by nearly four pounds, catching a total of 18 lbs., 3oz. Hester and Caldwell also qualified for Nationals during the Wild Card tourney in Kentucky earlier this summer where they finished 10th overall.

On Kentucky Lake, Rhea’s Blake Wheat and Andon Goins couldn’t quite keep the momentum going after ending day one in 21st place. They missed the cut for the championship round finishing 64th with 11lb.s, 9 oz. total for the tournament.

“Practice was tough but we managed to find a few good spots. The first day of the tournament we had a late boat number which kept us from getting the good morning bite,” Goins said. “With the small window of time that we had we got quite a few bites. Day two was a lot tougher as the Asian carp moved in and pushed all the bait out. We struggled all day and never got a keeper bite. Even though it wasn’t the finish that we wanted, we are extremely blessed to have made it to the national championship,” Goins added.

“My trip to Kentucky Lake was amazing and I had a blast on the lake and off the lake. The cabins were nice and the lake was beautiful. I had a great time and look forward to the opportunity to go back to the National Championship again next year,” Wheat said.

Garrett White and Tanner McClain were 83rd after day one and slipped down to 112th for the tournament overall with 7lbs.,12oz

“My first time at the Bassmaster high school National Championship was something I won’t forget. It was an honor to walk across the big stage in front of so many great fisherman,” McClain said.

“For Garrett and I, practice was very tough.  The weather in Paris felt like an oven [..] even though Garrett and I only weighed in three fish, we had a blast! I hope there is more chances in the future for us to attend another high school national championship,” he added.

“The first day of the tournament, we knew exactly where we were going,” White said. “We went to the docks where we had caught several fish, and I caught a fish early in the morning on a spook. We went a long time without a bite, until we went back to the docks in the afternoon, and Tanner caught our second keeper.”

“We got into a lot of fish around those docks, but they were all too small. We hoped for a better finish, but we were happy with what we got. We were extremely lucky to qualify in the 300 boat field out of 13,000 teams across the nation,” he said.

Mason Caldwell and Ben Hester suffered some mechanical issues on day one and struggled to battle back out of that disadvantage finishing with 4 lbs., 10 oz. in day two action for 165th overall.

“We were supposed to have four days to practice, but we had three, because of a bent trolling motor shaft. We took the boat to a local mechanic but on the first morning of the tournament we found the mechanic had made the situation worse,” Hester said. “We had the boat fixed by the on-site Yamaha service crew, and went back fishing. We zeroed the first day, but didn’t give up. It was a long, hard and hot week of fishing, and I hope to do it again next year with a better outcome,” he said.

Caldwell said the learning experience from the tournament is what he’ll carry with him moving forward and that he was grateful for simply for the accomplishment of qualifying for the tournament and giving it his best shot.

“It was an accomplishment just to get to go. It taught me to stay fishing through the hardest times even if you’re not catching fish you know at the end of the day you still have done your best,” he said.

Though it wasn’t quite the finish Rhea County Anglers head coach Brian Derlak was hoping for, he said he pleased with how with his teams and commended their efforts for simply qualifying for the tournament, which serves as the “Super Bowl” of high school bass fishing.

“What an honor and accomplishment to have three boats from Rhea County High School in our fourth consecutive Bassmaster National Championship,” Derlak said.

“Fishing proved to be extremely tough for a majority of the 300 boat field.  I’m proud that our teams hung in there and did their best!  Regardless of where they finished, these young fishermen had a week of fishing that they will never forget.”