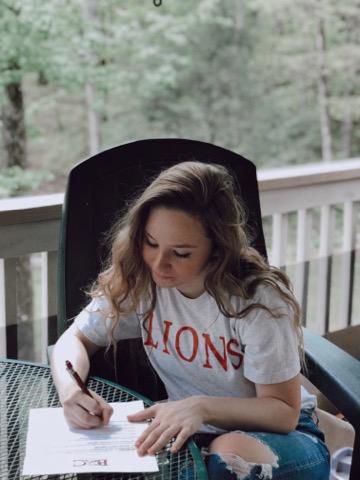 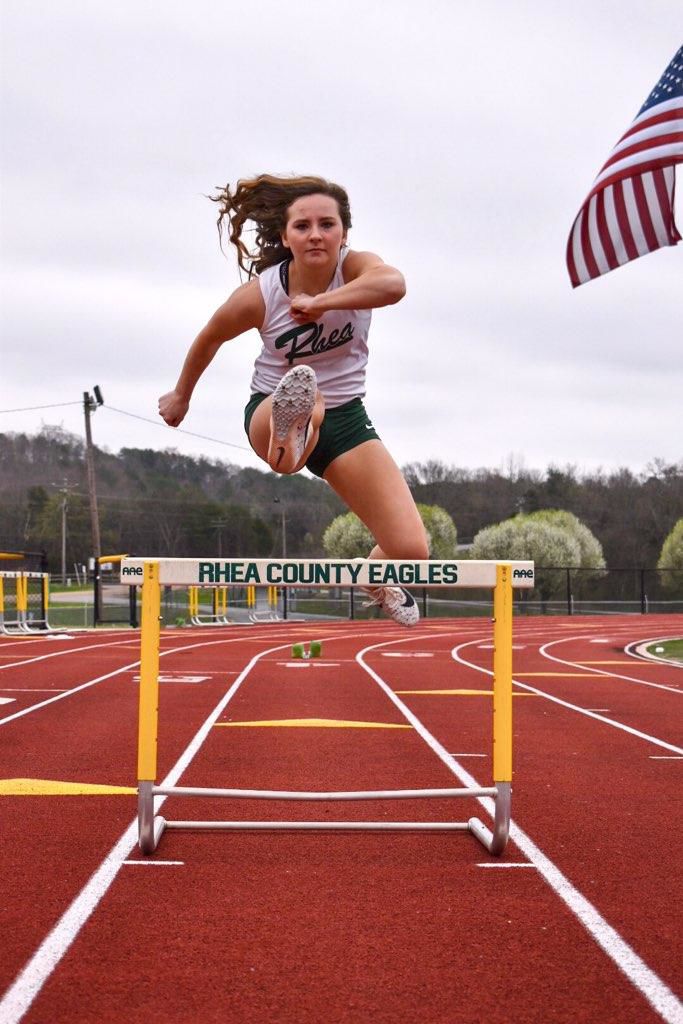 Rachel Davenport became the latest Rhea County High School (RCHS) student athlete to ink her national letter of intent, as she recently signed her papers to become a member of the Bryan College Lions’ track team.

Due to COVID-19 precautions, and the closure of RCHS and Bryan for the remainder of the 2019-20 school year, Davenport went about her signing in a non-traditional way and location—her home.

Surrounded by her family, Davenport signed her intent papers Bryan College sent her in the mail and made her collegiate plans official. She is now a Lion and will begin this fall.

Davenport didn’t go out for the RCHS track team until her junior year, then, had her entire senior season canceled due to COVID-19, making her signing day extra special, as her short-lived high school career garnered quick success.

“I had always wanted to run track since seventh grade, but I always had anxiety not to, because I would have thoughts like, am I being made fun of or judged. So, I kept putting it off,” explained Davenport about not trying track until her junior year. “My cousin ran for her high school in Kentucky, broke a bunch of records and now, she’s in the hall of fame at her high school. So, her story inspired me to do that too, and I finally pushed myself to go out for track my junior year.

“I would see the other college signings in the commons area at school and the thought of running in college and a signing day for me popped in my head during my junior year,” continued Davenport. “Since this season got canceled, I was kind of scared I wouldn’t get any offers, so I felt grateful, and pretty excited, honestly, when it happened.”

“Last year, was my first year in track, so I was really getting into it and used to it,” said Davenport. “We were having indoor preseason meets up until late February, and I was ready for this season because I was getting really good at [hurdles].

“I feel like I’ve only [done track] for a year, but honestly, it kind of feels like I’ve done it my whole life, and I love it,” continued Davenport.

Davenport admitted Bryan College wasn’t always in the picture, as she had originally intended to run at Tusculum University, but things have worked out accordingly for the hurdler.

“At first, my family suggested going to Bryan, but I wasn’t interested in the beginning,” explained Davenport about her college options. “I didn’t really have anywhere specific I wanted to go, and I wasn’t planning on going to Bryan, but since [Bryan assistant] coach James Eliezer talked to me, I thought to myself, I’ll look into it.

“Then, I went on a tour, liked the coaching staff a lot, and actually fell in love, honestly. I really liked Bryan a lot,” added Davenport.

“We were stretching at the beginning of practice one day, and it started raining really hard, so everyone ran underneath the concession stands for cover,” stated Davenport. “It was kind of like a moment with our team, because we were all there and together. It’s probably one of my favorites.”

Davenport credited longtime, successful RCHS track and cross-country coach, Steffan Holder, with preparing her to get where she is today.

“Coach Holder is very supportive, and it’s not just track stuff,” said Davenport of Holder. ”It could be something personal that is bothering us that day, and he would just help me out with it and talk to me.

“Even if it was after a bad race, he makes you feel better after it,” continued Davenport. “He’s not like other coaches, where they might make you go run after a bad race, he’s supportive and helpful with it. He’s a teacher of the sport, who pushes members of his team, but he also comforts you when it doesn’t work out. He’s a super, good coach.”

Coach Holder lauded Davenport for her tenacity to get better at her newfound sport and her overall determination and work ethic.

“I’m really, really proud of her. Her body of work in just one, solid year, has been pretty good,” said Holder of Davenport’s quick success. “It just shows you what hard work can do for you. She fell in love with the sport immediately, and was determined to run in college.

“Our motto is Desire, Dedication and Determination, and she has all three of those,” added Holder. “She had the desire to do it, she dedicated herself, and anytime she was out there, she was determined to be better than the time before.”

“Unfortunately, with us being out of school, we couldn’t do a signing like we normally do for all of the athletes,” explained Holder. “We plan to have some kind of signing party for her when we can all get back together, because she certainly deserves it. Any kid that gets to sign, either academically or whatever type of scholarship, academics, athletics, or whatever, deserves a party for that.”

“I wanted to do something in the medical field and help people, but I’m not good with blood or any of that, so I felt like it’s a good fit,” said Davenport.

Davenport will be joining two other Rhea County natives, Sarah Kinzalow and Sarah Welch, on the Bryan roster this fall. The Bryan College Lions’ head track and cross-country coach is Josh Bradley, and they compete in the Appalachian Athletic Conference (AAC).