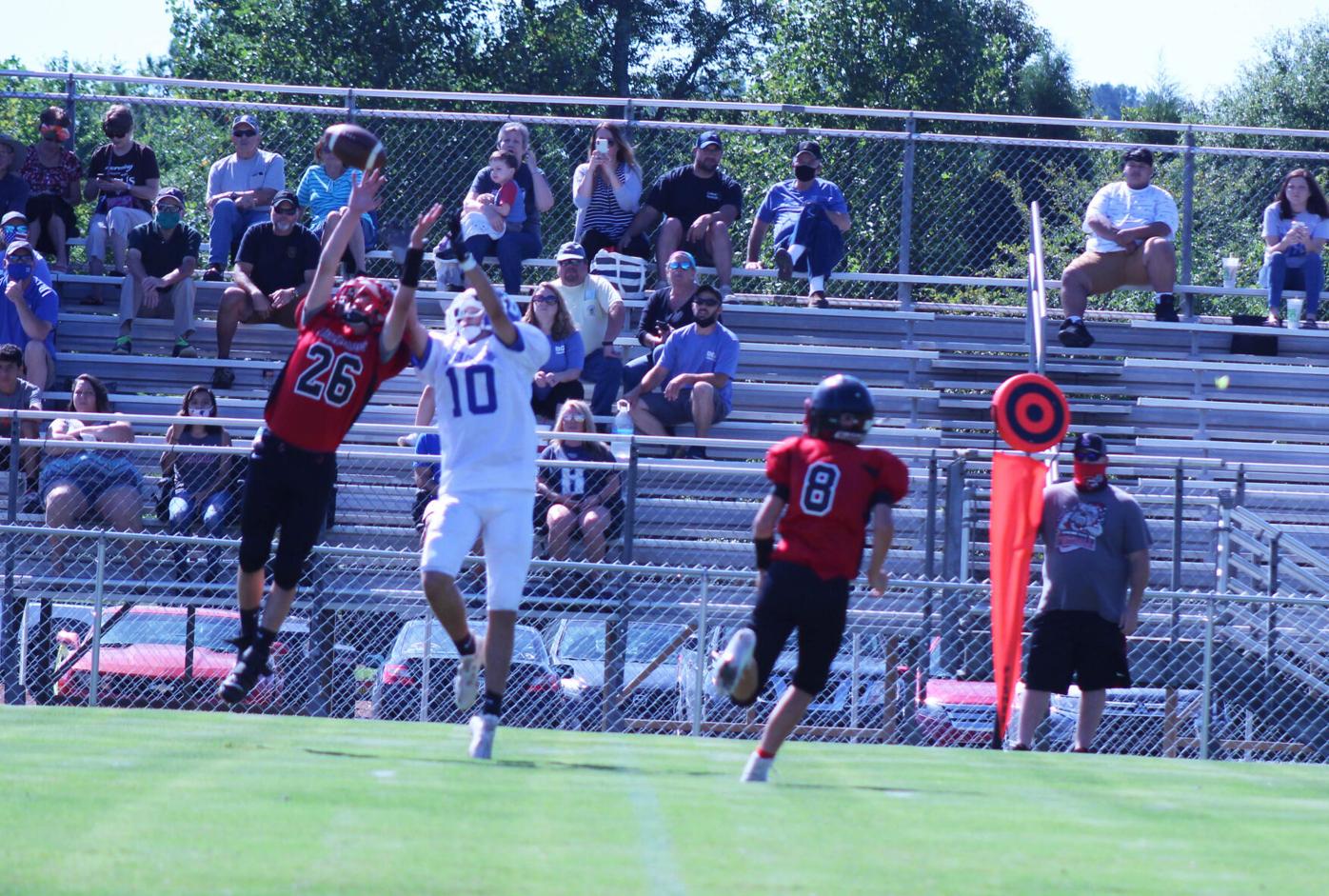 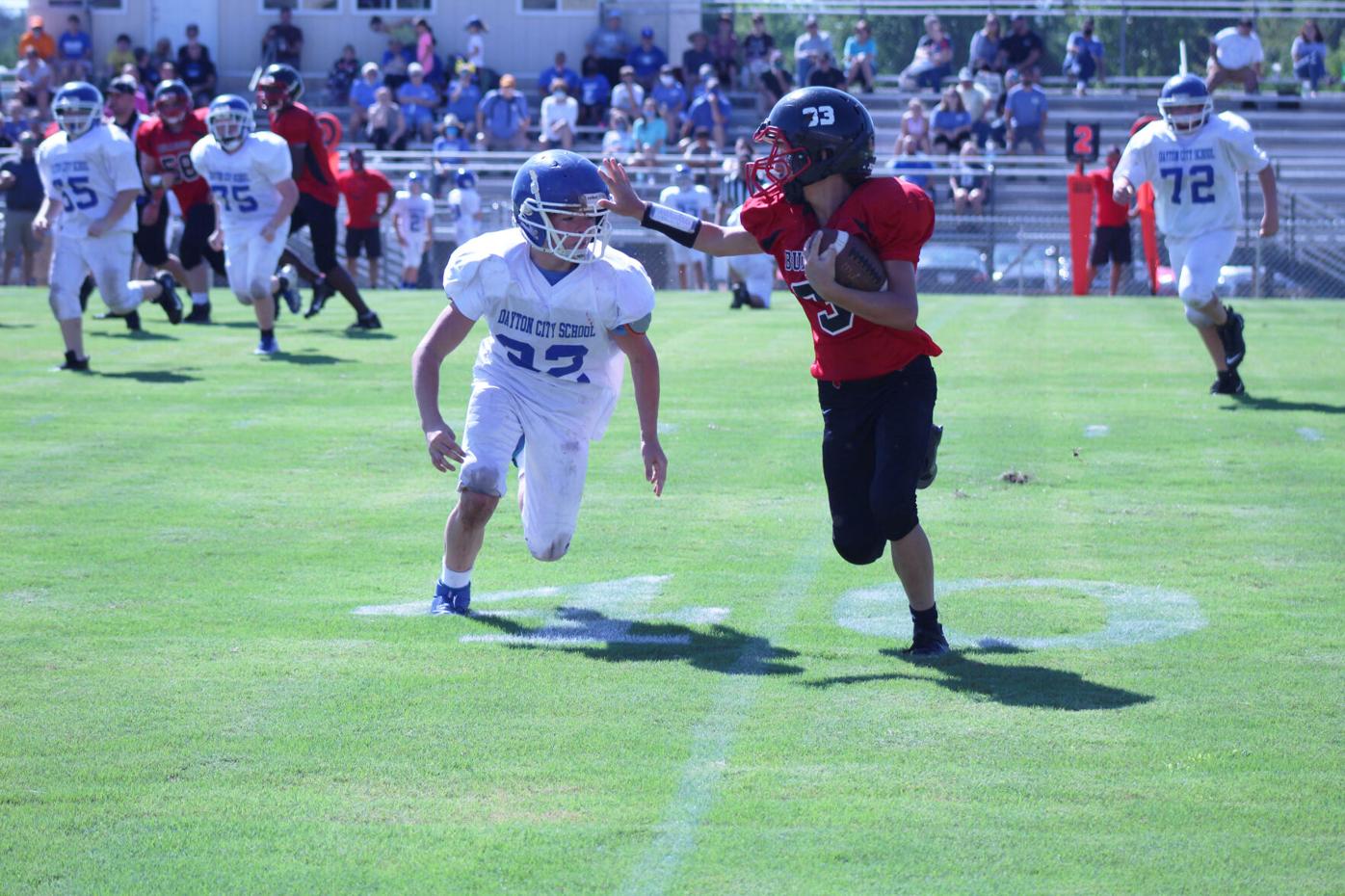 Spring City’s Ethan Cunningham (33) tries to get past Dayton City linebacker Ace Robison (32) during their game on Saturday, Sept. 5.

Spring City’s Ethan Cunningham (33) tries to get past Dayton City linebacker Ace Robison (32) during their game on Saturday, Sept. 5.

With the win, the Bulldogs move to 4-0 on the season and became this year’s county champs, as they bested the Rhea Middle School Eagles 42-12 in the season opener on Thursday, Aug. 20. The Sweatbees slip to 0-3 on the year.

The Bulldogs gained 320 yards on the ground, with six rushing touchdowns on the day. SCMS running back, Latron Alloway, led the Bulldogs with 193 yards on 18 carries and five TDs. He also had three 2-point conversions. Alloway has now scored 17 TDs in four games.

Bulldog head coach, Anthony Loden, lauded his team on the win, but also offered words of encouragement to the DCS team.

“They’re a little bit down this year, but I went over and spoke with them, they have a good group of kids over there, and we’re looking forward to seeing them at the high school level some day,” said Loden of the DCS team. “Coach Hill is doing a good job over there at Dayton City and like I told his players, we all have our ups and downs, we just got to deal with it, work through it and make each one better as we go.

“It feels good to finally play a home game and get to see all of these fans out here. It’s truly good, and good for these kids,” continued Loden. “We’ve been road warriors for a while, and we’re glad to be home.”

The Sweatbees were led by Rylin Suttles, who had 33 yards rushing on four carries. Suttles also denied a 2-point conversion attempt by SCMS by intercepting a pass. Ace Robison finished the day with 21 yards on six totes. Robison also had multiple tackles on the defensive side of the ball. Elijah Anderson tallied 19 yards on two carries. DCS QB, Braylon Geer completed four passes for 62 yards. J.P. Brannen had two catches for 45 yards, Robison had one catch for 12 yards and Anderson had one reception for five yards.

Austin Dodd led the charge for the Bulldog defense with multiple tackles, including several for losses and also had a sack. Mosley, Kaiden Rector and Cunningham had an interception apiece. KeShawn Smith had several tackles, including one for loss and he also recovered an onside kick.

Sweatbee head coach, Jeff Hill, was proud of his team’s effort, but sees some room for improvement.

“It was a tough day. After the game, I told them we’re creating our own problems, because we’d get a drive going and end up shooting ourselves in the foot,” said Hill. “I’ve got a bunch of great athletes. They’re athletic, but they’re a little green. I’ve got a lot of first-year players, and I don’t think they’ve realized the talent that they do have. Once they do, and once they come together, they’re going to see a different ball team.

“Once they get that, it’ll be clicking, and they’ll be like, ‘hey, we can do this.’ And they can, I’ve got all of the confidence in the world, I’m just sitting back waiting for them to turn it on,” continued Hill.

In a show of good sportsmanship, each coach spoke to the other’s team after the game.

“I told the Spring City team, they’re good, I’m proud of them and I’m proud of the way they handled themselves,” said Hill of his words to the Bulldogs. “You know we have these big inner rival games, but if you’ll notice, and if you’d been out here on the field, you would’ve heard no trash talk.

“They all enjoy playing against each other, and I also told the Spring City team to keep it up and I hope they win that championship over there,” continued Hill. “I also told their eighth graders when they all come together at the end of the day, they’ll be playing together at the high school. So, that’s what it’s all about. They have a good bunch of kids over there and I was glad to be able to talk to them.”

The Bulldogs will host Clinton on Thursday, Sept. 10, with kickoff scheduled for 7 p.m., at John Mincy Field.

The Sweatbees will host Huntsville on Thursday, Sept. 10, with kickoff scheduled for 7 p.m., at Gabbert Field.